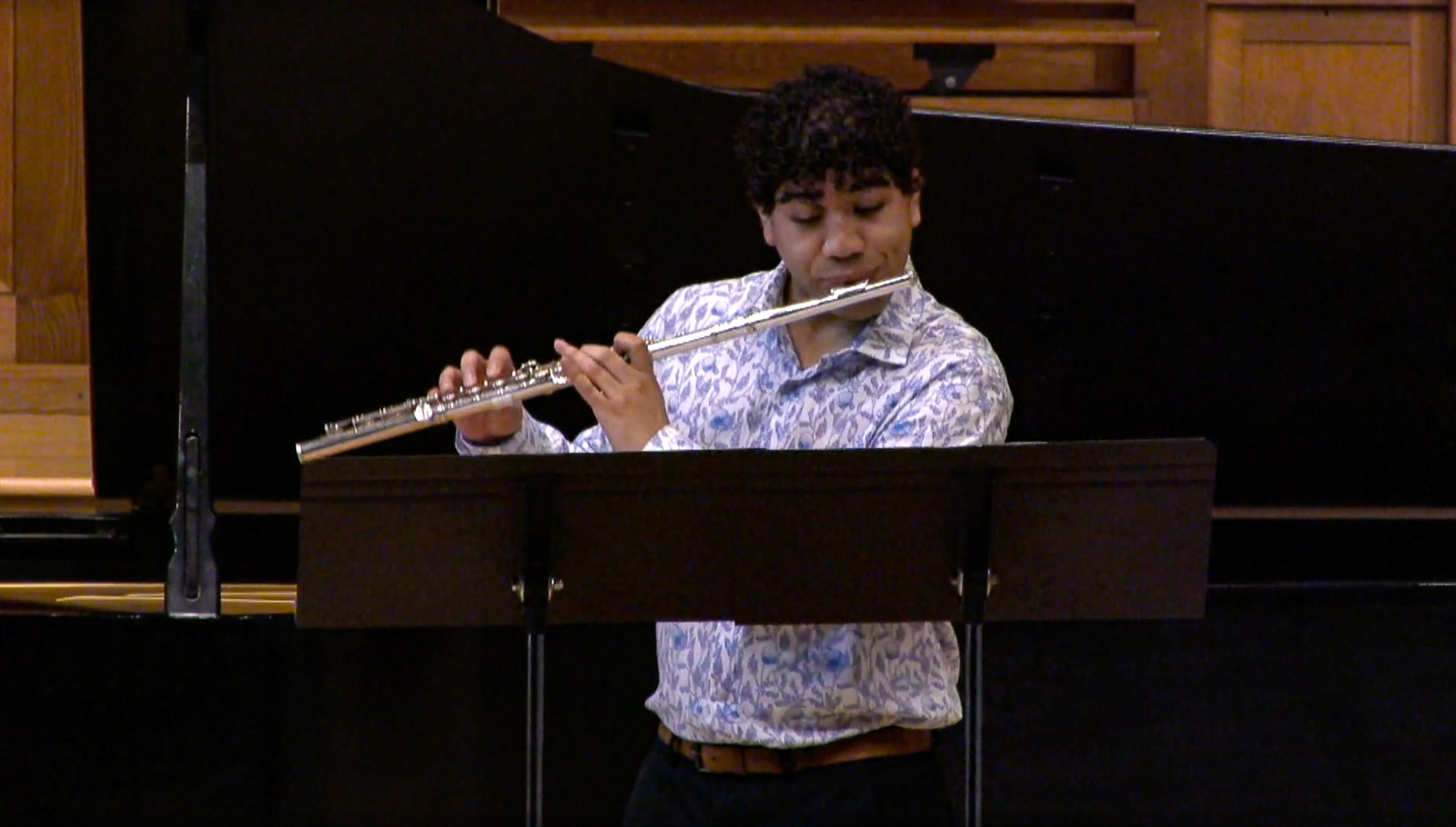 Juan Hernandez performed his junior recital in the chapel on Saturday, April 24, for a mixed in-person and virtual audience. The chapel was able to hold fifty socially distanced guests, and a livestream was recorded for those unable to attend in person. Hernandez played four unique pieces for a captivated audience. In preparing his lineup, he said that he wanted to share something different and include a diverse program that would stand out.

The opening piece, “Three Romances,” composed by Clara Schumann, included lyrical and soft movements. “It was important not only to match the style but to evoke emotions through the piece,” Hernandez said. The piece soared through three movements, which demonstrated Hernandez’s emotive playing and musicality. The second piece, “Danza de la Mariposa,” composed by Valerie Coleman, incorporated Latin styles and reflected nature.

Hernandez began his search for music over quarantine by browsing YouTube, and came across a piece, “Lamentos Bajo el Mar,” composed by Salvador Espasa, which caught his eye. Hernandez was looking for a piece in Spanish in order connect to his “background and his roots.” He commented that he wanted a piece, “closer to my heart,” so he reached out to the composer in Spanish and received a copy of the piece. This piece was the most challenging to perform. It incorporated air sounds and flutter tongue, as well as other contemporary techniques. Hernandez shared that he had “never done a lot of extended techniques in contemporary music” and this song pushed him out of his comfort zone. The contemporary technique of the song introduced Hernandez to a whole “new world of flute,” since he sang and played at the same time. “The flute can do so many things. It’s kind of crazy,” Hernandez said.

The fourth piece, “Duo for Flute and Piano,” composed by Aaron Copeland, was a piece that Hernandez heard when he was 11 years old, and he thought to himself that he would like to play it when he was older. “It was just so surreal to be able to play it in the recital,” Hernandez commented. “That piece meant so much to me.” It incorporated three movements, which were the “most challenging to put together,” according to Hernandez. The movements held contrasting moods and tempos, and the piece was lyrical, similar to “Three Romances.”

Hernandez shared that it was incredibly important for him to have a diverse program, which stands out from the traditional repertoire of classical music that is dominated by white male composers. “I think it’s important to bring diversity to the program, so that was my thought process going into that,” said Hernandez. “Three Romances” was composed by a female composer, “Danza de la Mariposa” by a Black female composer and “Lamentos Bajo el Mar” by a Spanish composer.

There were challenges Hernandez faced in having a primarily virtual performance, but he was grateful for having a “somewhat normal” recital, since many were able to enjoy it in person. Those who missed the recital can still access the recording on the Lawrence Vimeo page.