“Indigenize Education” Mural may be gone, but its message lives on 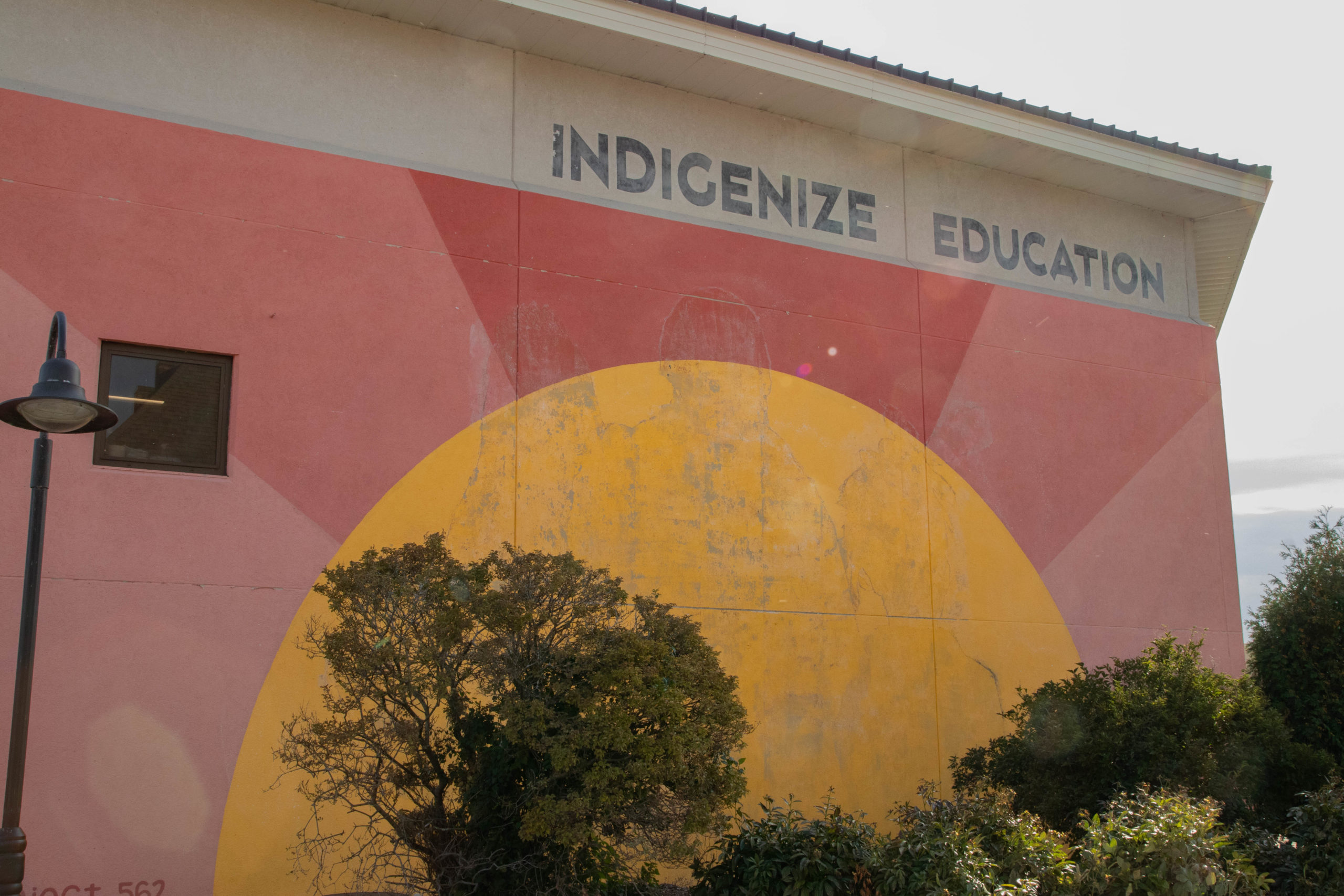 The detailed images of the the Indigenize Education mural have been removed, but the silhouettes remain. Photo by Alana Melvin.

There is a hole in the fabric of campus.

The Wellness Center’s north facing wall used to be the home of the Indigenize Education mural, one of the largest and most striking pieces of public art on the Lawrence campus. It has recently disappeared, leaving many questions in its wake — where did it come from, and how did it come to be? Where did it go? Why is it gone?

Its creator, Indigenous visual storyteller Matika Wilbur, installed the mural in April 2019 along with members of Lawrence University Native Americans (LUNA), University of Wisconsin Green Bay’s Intertribal Student Organization, and Project 562, which is Wilbur’s own non-profit photography project. The mural’s life expectancy was only two to five years, dependent upon weather conditions; made of wheatpaste, it was intentionally designed to be impermanent. All relationships, including those between students and our school, are works in progress and require maintenance. Wilbur’s design gave Lawrence the opportunity to reaffirm its commitment to Indigenous artists and students by bringing in new art and thereby keeping the conversation about Indigenous representation on campus alive.

Taneya Garcia, current president of LUNA, was a first-year when she helped install the mural two years ago. She explained that an intention behind Wilber’s design is that “this would be a space where we as Native students could collaborate with Indigenous artists and collaborate with the university to make something that made us feel welcome or seen on this campus.” Garcia reflected further that Wilbur “specifically intended it to be a collaboration project between Indigenous students and Project 562,” as much of Wilbur’s work focuses on building community, and is motivated by giving young people the chance to tell their own stories and have cultural pride.

Wilbur told her own story during the Convocation ceremony in April 2019; this was yet another transformative event for the Lawrence community as she was the first Indigenous woman to give the Convocation address. When she spoke, she shared that before creating Project 562, she taught at a tribal school on her reservation and found that while the work re-centered her within her community, it made her confront the fact that the ‘American Dream’ does not include Indigenous people. She noted that the core of the American public school curriculum is “not based on truth. It does not cultivate our Indigenous intelligence.” While she was a teacher, she lost 19 of her students to tragedies like suicide and addiction; these losses made her realize that “until we create these spaces where our own kids feel like they belong, like this is a space that’s meant for them, we’re going to keep having this experience” — the experience of mourning all the lost potential of so many children and young adults.

Garcia said that she feels like Wilbur’s Convocation address acknowledged that “Native students are on campus and that our voices weren’t being listened to as much,” and she believes that receiving recognition from a prominent Native voice helped illuminate the movement for equitable representation. Indeed, since the installation of the mural, Indigenous representation has grown at Lawrence; the new Otāēciah sculpture by Oneida artist Chris Cornelius has been installed in the space between the Seeley G. Mudd Library. The space where the sculpture lives between the library and the Wriston Art Center has been named Kaeyes Mamaceqtawuk Plaza in recognition that Lawrence occupies ancestral Menominee land, to name a few.

The mural’s installation was not only transformational for the wider Lawrence community but for the individual students who were at the forefront of the project. Garcia cherishes her memories of working on the installation as an unforgettable experience. Despite the difficulty of taking time away from classes and other responsibilities, students were determined to complete the project, working hard for many hours each day. Garcia recalls, “We were spending seven to eight hours a day out in the cold, wearing two or three layers because it was so cold. We had our hands covered in wheatpaste, we were cutting, we were painting, we were washing brushes.” She thinks it was “a very Indigenous way of doing things; we all came together as a community, and it reminded me of being home and doing things with the women in my community, being in a space where we make things happen.”

In retrospect, Garcia admitted to the intensity of the project, recalling days when she went hungry because there was no time to eat, but “in the moment it felt like I was on top of the world, mostly because we had community there. We were singing, we were telling stories, we were laughing, we were dancing.”

The students involved with the project were given the opportunity to make artistic decisions and choose how their story would be told. On the first day of installation, the students chose the colors they wanted to use in the mural. They strategically chose yellow and pink so they could “feel seen and be highlighted.” Furthermore, the mural was installed directly across the sidewalk from the president’s office in Sampson House; the students wanted to make sure that every time the Lawrence University president looked out, they would see and hear the message.

The students also chose the words at the top of the mural: “Indigenize Education.” Garcia shared that they first tried out the phrase “decolonize education,” but that they learned from Wilbur that it is impossible to decolonize the educational system. In Garcia’s words, “Colonial institutions, especially universities, and especially schools that utilize western thought, were put into place to make a message come across: that Indigenous is not enough, that it’s not what we want in the United States.” To Indigenize education, rather than decolonizing it, means that “we hold space for indigenous knowledge to be valued and we hold space for indigenous students to practice their culture.” Garcia believes that “when we as a university and as a people actively try to integrate Indigenous pathways and Indigenous ways of thinking into our curriculum and into our space we begin to move away from the problematic and troubling implications of colonization in the educational system.”

Indigenous scholars face discrimination from within their own fields, Garcia said; “people discredit our findings as scholars because they think we’re too close to the research, they think we’re too emotional about the research, we’re too invested, but this holds space for us to reclaim who we are as Indigenous scholars.” Furthermore, “it makes us hold space to acknowledge that we can have education systems that value Indigeneity, that value practices of being connected with nature, that teach Indigenous sovereignty, that teach accurate histories of what happened to Native people, and especially teach the histories of the Menominee Nation and that we are here occupying Menominee Nation lands.”

Garcia said she doesn’t know of any immediate plans for the space where the mural previously lived, but declares, “I’m not leaving this university without something in place or at least a seed planted in administrative minds that we need something up there, that you’re not going to let that space designed for Indigenous students to be forgotten. You’re not going to let us be pushed under the rug again.”