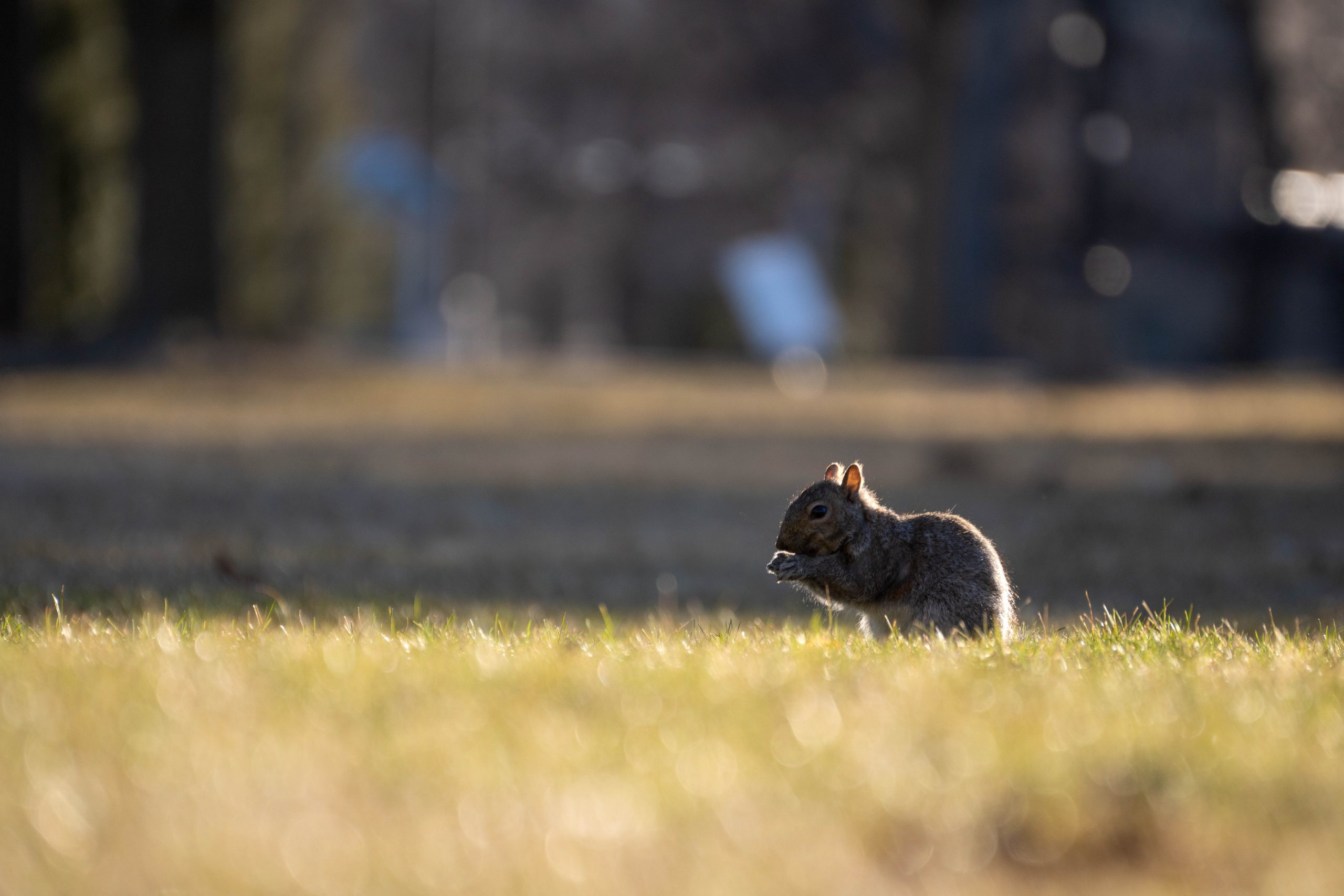 Squirrels are common on the Lawrence campus, but are a less obvious fit for domestication. Photo by Kai Frueh.

For me, and I imagine for most of you reading as well, this has been a characteristically busy term at Lawrence. Unlike in the summer, I rarely have enough free time to relax by watching movies or TV when I need to turn my brain off for a little while, so it’s just easier for me to see what’s going on with Instagram, or TikTok, or whatever the kids are using these days. And their algorithms have me pinned down to a T; I don’t want to see beautiful photos of mountains or outer space, I don’t want to learn about politics from a platform owned by Mark Zuckerberg, and I don’t want to hear about the Kardashians at all if I can help it. I want to see endless pictures and videos of cute animals, and I find myself especially drawn to the ones that aren’t traditional pets but have made friends with people anyway.

I find it in some way like watching the Olympics as a complete layman. Most of the sports, like swimming, high jump or triathlon, I see and recognize that I could never compete at even an average level without years of training starting as a child. But ping pong or archery? Surely I could do that. In moments of completely unbridled hubris, even something as outlandish as ski jumping seems attainable — the mountain seems to be doing most of the work anyway, you just need to land without breaking your legs.

In the same way, when I see videos of people playing with tigers and brown bears, I’m able to recognize that I could not do that. But the same way I convince myself that I could master curling if I really set my mind to it, videos online have me thinking a capybara seems like it might eat melon out of my hand. Maybe a pangolin would enjoy sitting in my lap by the fire while I read a book.

It has me thinking about pets in general, how we picked which animals to domesticate, and whether there’s any rhyme or reason to those choices. The most popular pets (at least in the USA), like cats and dogs, seem to have some obvious utility on farms and in houses, but after that it definitely trails off — there’s no way rabbits or ferrets have ever been useful to anyone. The criteria seems so vague! For the most part, “pet” animals live in the wild nearby enough that they’re accessible close to home, or at least they did at one point; they also aren’t good livestock for one reason or another. Still, these reasons don’t seem to narrow the options down to just our most common pets either. There are undoubtedly some notable outliers who warrant a second look at domestication, and in this writer’s opinion, the two jostling for top position are raccoons and groundhogs.

The reason to have raccoons as pets seems obvious, at least to me. They fit a growing niche as the perfect combination between cats and dogs, particularly as smaller dogs are becoming increasingly popular. They’re small enough to pick up and be lap pets but large enough to not be a purse animal, and apparently they’re quite affectionate when they grow up around people, living up to twenty years in captivity. The Internet says they have very particular nutritional needs, but I’ve seen enough raccoons in my life to know that owning a raccoon could be a great way to kill two birds with one stone. Raccoons could provide American families across the country with both a wonderful companion and a way to mitigate the waste crisis by feeding it the same diet it gets in the wild: trash. Are they high maintenance? Yes they are, but that’s not as much of a problem as people seem to make it out to be. They’re intelligent and need space to roam, as well as lots of enrichment with toys; they’re temperamental and will destroy things and bite if they don’t get their way; they don’t sleep through the night and often incur high medical costs from a variety of potential health issues and specialized care. Sound like something else people have in their homes? Oh right, kids! Except people will have like five of those without batting an eye, and raccoons don’t need clothes and expensive shoes that they grow out of in two weeks, or ask for you to send them to college for 200,000 dollars, or smoke weed in your house when they come home from that college. With an increasing number of young people choosing not to have kids, but wanting a funnier, more interesting companion than a dog or cat, this seems like an obvious choice. I could easily make friends with a raccoon.

Groundhogs seem like a perfect alternative for raccoons for people who prefer rabbits to dogs, and every year it’s rubbed in my face that I can’t have one. The Internet, once again, claims they aren’t good pets, but if some random guy in Pennsylvania can manhandle Punxsutawney Phil every year in search of a novelty weather forecast, surely I can have one in my house to pet and feed carrots to. It seems groundhogs have warranted more consideration than raccoons as pets, as evidenced by this hilarious 1883 report by the New Hampshire Legislative Woodchuck Committee: “The woodchuck, despite its deformities both of mind and body, possesses some of the amenities of a higher civilization. It cleans its face after the manner of the squirrels, and licks its fur after the manner of a cat. Your committee is too wise, however, to be deceived by this purely superficial observation of better habits. Contemporaneous with the ark, the woodchuck has not made any material progress in social science, and it is now too late to reform the wayward sinner. The average age of the woodchuck is too long…” Deformities of mind and body? Wayward sinner? They’re cute, and they can’t be that bad! Surely they’re not so horrible that the three years they live on average is too much to bear. They seem to me to be pretty much the same as raccoons in terms of appeal and care requirements, with the notable exception of their teeth and propensity to dig.

The digging, truthfully, I don’t have a great solution for. But all things considered, dogs dig too, and as long as you keep the little guys in the house most of the time, they should be fine. In fact, groundhogs’ digging can aerate the soil in a way that actually benefits the overall health of plants and the land, so for all of the damage “Caddyshack” has done to their reputation as crop killers and landscape destroyers, they may be more useful than it seems. Their teeth, which grow a sixteenth of an inch each week, do pose somewhat of an issue, but as long as they have something to chew, again like dogs and babies, they should be totally fine.

So why aren’t these animals domesticated like dogs and cats? My guess is that it’s complicated, but has a lot to do with two things. The first is that unlike cats and dogs, raccoons and groundhogs provide no obvious utility to farmers or anyone else, and in fact they are pests and varmints who cause trouble and destroy crops; the second is that they were, for a long time, more valuable for their skins and pelts than as companions for people without extra food to feed them, energy to train them and patience for the damage they can cause.

And thus, the fun collapses. When I watch the Olympics, I know deep down that I cannot, in fact, play any of the sports in it particularly well, and in truth, the point of this article is not to say they should be pets; in fact, I think there’s probably an argument to be made that the domestication of any animal is sort of predatory and exploitative, and not a practice we should be expanding. But still, why did people choose rabbits instead of groundhogs? Surely there’s an alternate universe where they went the other route, and left rabbits as an obscure novelty while inviting raccoons into their homes. Either way, I think it’s worth questioning why we surround ourselves with the companions we do, and I know that when I see fuzzy little guys on my way to class I’ll keep daydreaming about snatching ‘em up and bringing them home. One of these days I’ll do it, just you wait. I bet the squirrels around here could teach me a thing or two about pole vaulting too — how’s that for a use?