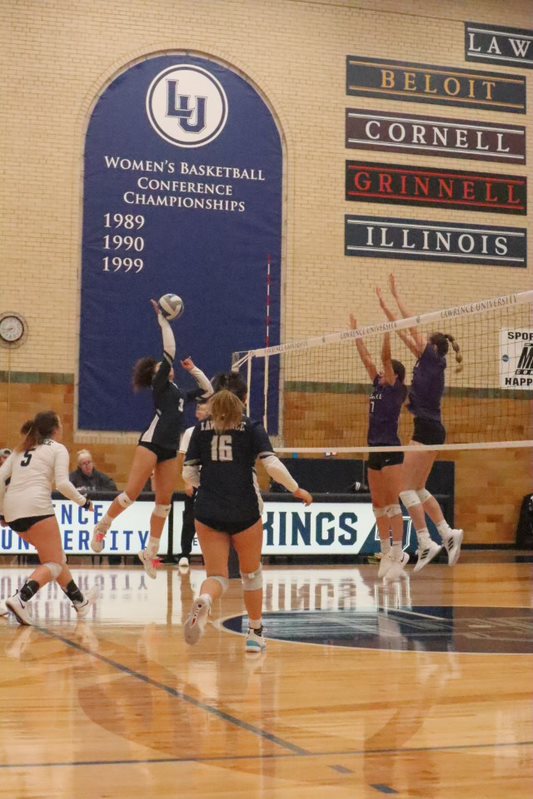 Women’s volleyball wrapped up their season last week with games against Lake Forest College and Cornell College. Both matches were Midwest Conference decisions, and ended in 3-0 losses for the Vikings. These games led Lawrence’s final season tally to twenty-six losses and one win.

Wednesday’s game was their annual “Dig Pink” match to increase breast cancer awareness and saw Lawrence players wear pink uniforms while competing against Lake Forest College. The Foresters were fresh off of a five-game winning streak, and, unfortunately for the Vikings, that streak continued with their match. Lake Forest defeated Lawrence 25-18 in the first set, 25-18 in the second set, and 25-15 in the third and final set. The Foresters took the lead initially in the first set, despite three service errors early on. The Vikings, who have a history of service errors throughout the season, didn’t have any in the first set. Despite this, Lake Forest started racking up points until they were leading Lawrence 20-10. The Vikings battled back and scored an 8-2 run, which made the score 22-18. They were unable to keep this momentum, however, as the Foresters scored three consecutive points to win the set. The second set opened with a service error by Lawrence. Both teams were tied 4-4 early on, with Lawrence quickly taking a two- point lead. The Foresters fought back to bring the teams to a 7-7 tie, which didn’t last long as the Vikings pulled ahead once again with a two- point lead. Lake Forest once again tied the score at 12-12, after which they began to pull away with the lead. The Vikings had some great kills to keep the Foresters on their toes, but eventually lost the set 25-18. The final set saw Lawrence take the first point, with both teams tied 2-2 early on. Lawrence called a timeout as Lake Forest started to pull away with a six point lead. After the timeout, the Vikings shrunk their deficit to three points with a score of 11-7. Despite their best efforts, the Forester’s lead continued to grow, reaching ten points by the end of the game. Overall, the Vikings played well against the conference-ranked team but couldn’t quite claim a set.

On Friday, Cornell College defeated Lawrence 25-14, 25-16, 25-11. The Rams were the heavily favored team, as they went into the match with seven conference decision wins and zero losses under their belts. Lawrence had a rough start to the first set, with Cornell sneaking in two kills very early on. The Vikings earned their first point on a ball handling error by Cornell, but couldn’t stop the Rams as they started pulling away with the lead. Lawrence called a timeout to try to break Cornell’s momentum, but instead saw the Rams pull away even further with a score of 15-8. After a series of Cornell errors, however, Lawrence began to make a comeback with a four- point run. This momentum was ended when a Lawrence ball went into the net and the Rams began quickly racking up points again, ending the set with a 25-14 score. The second set started with a service error by Cornell, earning the Vikings the first point. They were tied 2-2 early on in the set, and remained neck-in-neck until the scores became double digits. Despite more service errors, Cornell began to pull away and earned an eleven- point lead towards the end of the set. Lawrence fought back, bringing the score to 24-16 before the Rams scored their final point to win the set. The third set started with a tie once again, as both teams scored two points. This tie was broken by the Rams, as they went on a nine- point run to bring the score to 11-2. Lawrence tried for a comeback by scoring four consecutive points, but their momentum was broken by another Cornell scoring run, bringing the score to 21-8. Lawrence managed to get in a few more points, but Cornell maintained a decisive lead and won the set with a fourteen- points surplus over the Vikings.