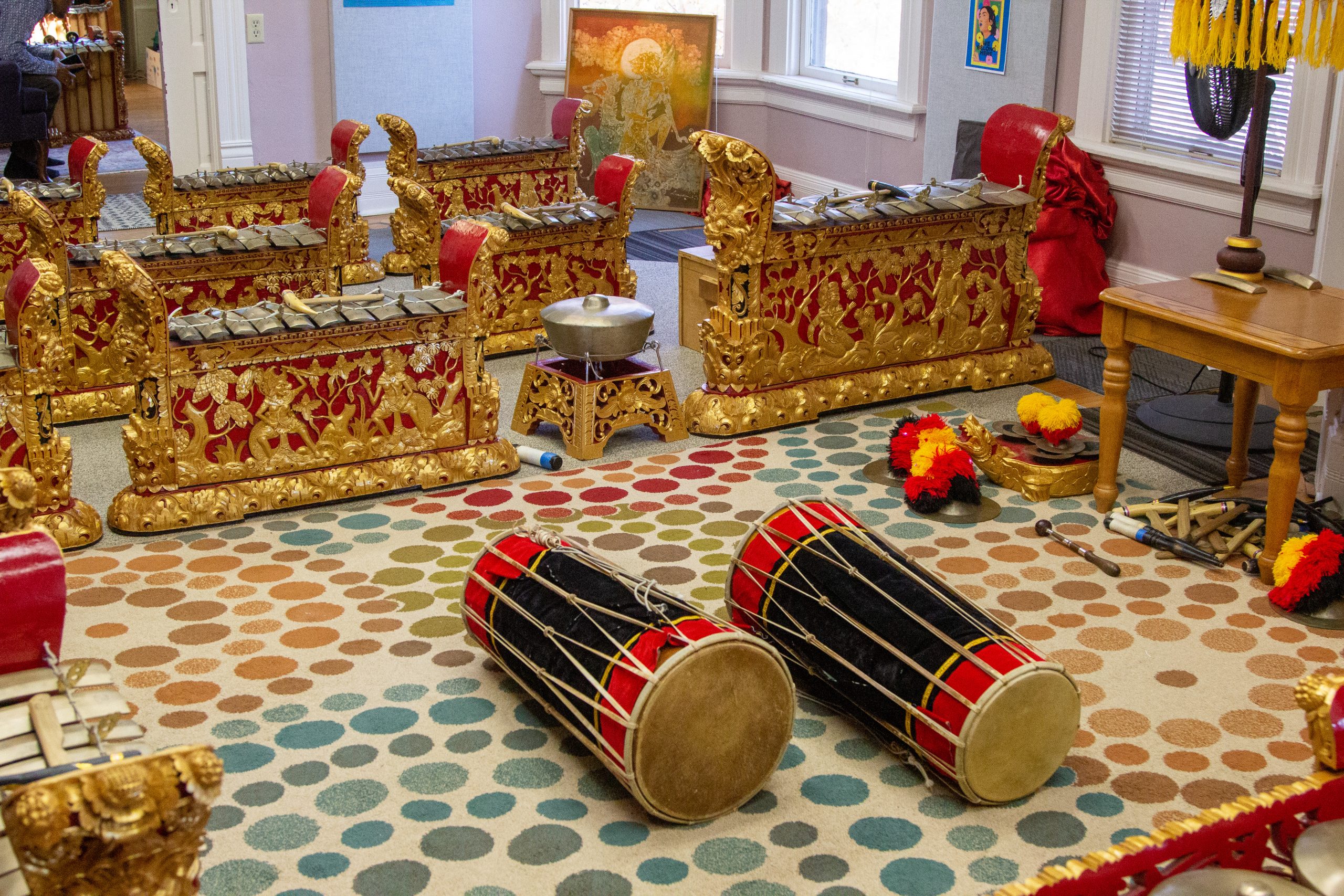 Gamelan is a popular ensemble at Lawrence and, for the first time, is a part of the First-Year Studies curriculum. Gamelan is a style of traditional music that is played as an ensemble by Javanese, Balinese and Sundanese people of the Indonesian Archipelago. The word “gamelan” comes from the root verb “gamel”, which effectively translates as “to play percussion instruments,” in Javanese, the word for gamelan is “gambelan,” and in Sundanese, it’s called “degung.”

Lawrence’s Balinese gamelan is taught by Associate Professor of Ethnomusicology Sonja Downing and her husband, Lecturer of Music & Director of Gamelan I Dewa Ketut Alit Adnyana. Dewa is from Bali, one of the many islands of Indonesia. Bali is located directly east of Java, where Indonesia’s capital, Jakarta, is located.

Dewa commented that gamelan is very important in his culture and is used to celebrate many events, such as births, deaths, weddings and pregnancies as well as government events.

“We have a lot of gamelan in Bali…for ceremonies and sometimes to welcome tourists,” Dewa said.

According to Downing, it took a lot of pushing to get gamelan included in First-Year Studies. There are several long lists of works, organized by subject, that have been pre-approved to be considered when a new work is chosen for the First-Year Studies curriculum each year. For a long time, the list of music works was almost completely dominated by European, male composers.

Although Downing believes that the works of Johann Sebastian Bach, Ludwig van Beethoven and Johannes Brahms are valuable, she feels that the point of First-Year Studies is to expose incoming students to a more diverse selection of works. When the music list was reviewed and updated, Downing proposed a few non-Western works, and a couple of them advanced to the First-Year Studies committee.

“[It’s important to] decenter our experiences and just to broaden our perspective,” Downing said. “[We need to] know that what we’re used to isn’t the only way of doing things.”

Indonesia is an incredibly diverse country, with thousands of islands and ethnic groups and hundreds of languages. Downing said that gamelan is a good gateway to learning about Indonesia and its diversity, but feels that it gets more than its fair share of attention. She feels that this can lead to the cultural traditions of other Indonesian groups getting ignored. She said that for the past half-century or so, the government of Indonesia has focused on emphasizing gamelan as part of the national culture, which has disadvantaged other Indonesian cultural practices.

“The [Indonesian] government has definitely picked and chose what they want to uphold,” said Downing. “And it’s been really uneven.”

Dewa hopes that gamelan can help Americans have a better understanding of Balinese culture. After living in the United States for 13 years, he has observed that American culture revolves around work, while life in Bali is more communal. He added that if you’re in Bali, it’s common to share food and drinks and be very close with your neighbors.

“In Bali, if my cousin doesn’t work, he can still eat,” said Dewa.

Both Downing and Dewa credited Dean of the Conservatory Brian Pertl for making gamelan happen at Lawrence. Pertl saw Dewa’s cousin perform in a gamelan group in Seattle, Wash., in the early 2000s and became interested in the style. In a previous article about student retention, Pertl commented that he’s been working to expand courses offered by the conservatory beyond white, European composers. Downing feels that gamelan is a part of this process.

Downing gave credit to Associate Professor of Religious Studies and Director of First-Year Studies Martyn Smith for the fact that the gamelan piece “Jaya Semara” was added to the First-Year Studies curriculum. She added that Smith has been to Indonesia himself.

Smith commented that when the opportunity came up to select a work of music for fall term of First-Year Studies, “Jaya Semara” struck him as being “perfect.” He didn’t like the fact that it took until winter term for First-Year Studies classes to encounter a work of music and felt that it was important to include a piece that would broaden the perspectives of first-years. He also credited Downing and Dewa for making gamelan accessible at Lawrence.

“Gamelan adds a musical component to First-Year Studies, it widens the range of global cultures present in the curriculum and it represents a unique strength of our campus,” Smith said.