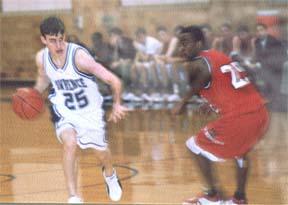 The LU men’s basketball team defeated two Midwest Conference opponents from Illinois last weekend. Friday night the Vikings hosted Knox College, and on Saturday afternoon Lake Forest College came to town. They played both games without team captain and star guard Rob Nenahlo, who has not played since suffering a back injury on Dec. 29. When he will return is still unknown.

From the start, Friday night’s game against Knox was fast and furious. Lawrence leapt to a comfortable 28-15 lead with 10:30 left in the first half, extending their lead to 48-27 at halftime. This early show of offensive firepower exploited the non-existent Knox defense, though the Vikings’ defense was equally as ineffectual.

Knox, getting into foul trouble early in the second half, saw their only comeback attempt thwarted as they put Lawrence in the bonus with more than thirteen minutes to go in the game.

Knox coach Tim Heimann spent much of the night in the referee’s face, ultimately receiving a technical foul with nine minutes left.

By then, the Vikings had the game in hand. The sideline show wasn’t finished, though. With a little more than eight minutes left in the game, Heimann started yelling in the direction of Lawrence’s bench and coach John Tharp. This came as a surprise to Tharp, who began to yell back.

The altercation ended as quickly as it began, and with four minutes left in the game, Lawrence was able to put every player on the bench in the game. The game ended with Lawrence a 78-60 victor.

This victory was especially sweet for Coach Tharp, because it was his one hundredth career victory at Lawrence. His team responded by dumping the team’s water cooler over Tharp. Tharp is one of only 3 Lawrence men’s basketball coaches to win one hundred games, the others being Mike Gallus and Art Denney.

Brent Vandermause led the Vikings with eighteen points, and three other Vikings were in double figures. This excitement carried over to Saturday afternoon’s game against the Forresters of Lake Forrest.

As they did against Knox, Lawrence again came out running and gunning. Despite suffering from poor shooting, the Vikings managed to build a halftime lead of 39-28. In the second half, Lake Forest played well enough to keep pace with the Vikes, but could not overcome the offense of senior guard Ryan Gebler, who led the Vikings with twenty-three points and eight rebounds. The Vikings hung on and defeated Lake Forest 73-63.

The Vikings now own a record of 6-9 for the year and are tied for fourth place in the Midwest Conference with a 4-4 conference record. The Vikings travel to Illinois this weekend to play Illinois College on Friday night, and then have a rematch with Knox on Saturday afternoon.