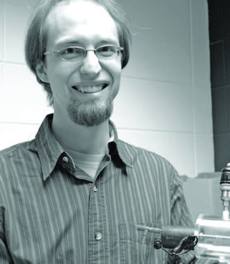 He is a four-year member of the LU Bomb Squad and an ardent lover of “lasers and fire.” Round that off with an undergraduate degree in physics and a robust goatee and, come summer 2010, Rob Niederriter will either proclaim super-villainy and take over the world or … go on to graduate school. Lucky for us he has a passion for studying physics.
Hailing from Minnesota, Niederriter came to Lawrence seeking a biochemistry major, but first had to test the waters and see what other science courses were like. After sampling a bit of biology, chemistry, and physics, he chose physics and has never looked back.
Two summers ago, Niederriter trekked across the Atlantic to Germany where he worked on determining the components of different sections of open flame by laser spectroscopy.
These experiments are done by focusing highly calibrated lasers on a point of a fire and finding out what sort of chemicals are present. Niederriter helped refine and optimize the software used to interpret the data collected by the laser spectrometer.
A year later, Niederriter spent his summer studying waves in plasmas at UCLA.
“Waves are a great example of the way theories build off each other in physics,” explained Niederriter. “The fundamentals of waves can be seen in mechanical systems, in water, light, quantum theory. Any single topic in physics lends itself as a basic primer for countless other principles. That’s what I like about physics: its consistency,” Niederriter remarked.
Those of you who have had difficulty in any introductory physics course may have already met Niederriter. He has been a CTL tutor for physics 120, 130, 150, and 160 along with “electronics, astronomy, and other random classes.”
If there is one passion Niederriter has other than studying physics, it is teaching it.
After graduation, Niederriter plans on studying more physics in graduate school in the hopes of becoming a professor – his father is also a physics professor.
“But I would definitely not give up research,” said Niederriter. “If I only did one I know I would miss the other. I would have to teach and research.”
He hopes to end up in a liberal arts institution like Lawrence where there is a good mix of people, “where I can talk with a philosophy major and a cellist. That’s what makes liberal arts institutions great,” Niederriter exclaimed.
If you would like to talk about physics, or, more likely, need help in a physics class, contact Niederriter through the CTL or his LU e-mail – he will be more than happy to assist you. 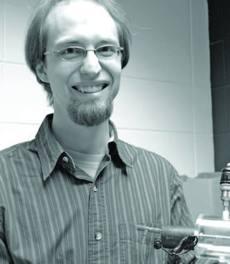