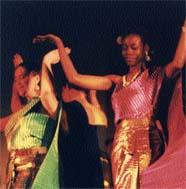 Lawrence International will once again be holding its annual Cabaret this Sunday in the Recreation Center. While student rate tickets to the popular event are already sold-out, $10 tickets are still available at the Box Office and $12 tickets will be sold at the door.
Ray Feller

Lawrence International will once again be holding its annual Cabaret this Sunday in the Recreation Center. While student rate tickets to the popular event are already sold-out, $10 tickets are still available at the Box Office and $12 tickets will be sold at the door. (Lawrence International)

The theme for this year’s Cabaret is “One World, One People,” but it has taken many people and a lot of time to put together the international show.Members of Lawrence International have been working since first term to create the show and dinner for this Sunday. Around sixty students will be performing in dances, songs, poetry, and a fashion show.

“It’s a good opportunity for the Lawrence students and community to experience such an event just because it gives them a snapshot of different cultures that are right next door,” explained Stephen Henry, the president of LI.

Saretta Ramdial, the vice president of LI, emphasized that the people behind Cabaret are not only international students. “Americans participate and are always welcome to events and meetings,” she said. Ramdial encourages anyone who is interested in LI to become a part of the club.

The evening begins with food at 5:00 p.m. Over ten countries are represented in the dinner, which is prepared by students from LI. Japan, Jamaica, Iran, Norway, and India are among the national cuisines that will be offered at the dinner.

Although the show doesn’t begin until 6:00 p.m., Ramdial encourages people to arrive by 5:15 or 5:30 p.m. There is no assigned seating, and so Ramdial mentioned that those who arrive first have the best opportunity to sit close to the stage.

Henry said that Cabaret helps “embody the idea of the bringing together of nations. Although we are different, we can still get along.” Ramdial commented that many students participate, particularly in the fashion show, by wearing clothing from countries other than their own.

The show will contain dances from the Indian subcontinent and Bangladesh, an Arab cultural act, Jamaican poetry in Patois, a Jamaican dance, and African dance, the fashion show, a Latin American musical performance, and a formation dance.

One of the newest additions to the show will be the Arab cultural act. Featuring a belly dance and a folk song, the performance will represent various countries, including Morrocco and Palestine.

The Jamaican poetry reading will be performed in Patois, following a translation. The reading will involve the audience, in the style of def or dub poetry.

The final dance, the formation dance, combines a lot of cultures together. As Henry explained, “It is American pop culture moves mixed in with our own international dance moves as well.”

Rehearsals have been every other day since the middle of second term. As Henry explained, it is important for everyone to get in sink, as well as to get all of the details and costumes together.

Although student rate tickets are sold out, anyone interested in attending Cabaret can purchase tickets through the box office for $10, or at the door for $12. Children under twelve can attend for $5.