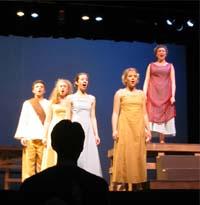 Director Brad Behrmann looks on for one of the final dress rehearsals of Children of Eden. The show opened last night, but the production will put on two more shows, Friday and Saturday night. Free,general admission tickets are still available.
Jeff Christoff

Director Brad Behrmann looks on for one of the final dress rehearsals of Children of Eden. The show opened last night, but the production will put on two more shows, Friday and Saturday night. Free,general admission tickets are still available. (Julien Poncet)

This weekend not only marks what Christians believe as Christ’s resurrection, but Adam and Eve will get expelled from Eden and Noah and family will endure the Flood as LU Musical Productions presents Steven Schwartz’s Children of Eden, directed by Brad Behrmann.”This is a unique opportunity for performers and audience-goers, as Lawrence doesn’t typically produce musicals as modern as Children of Eden,” Behrmann said.

Act I tells the biblical story of the creation, while Act II relates the tale of Noah and the Flood. However, the tales do not appear exactly as they are found in the Bible.

“The creators [of the show] took liberties with the stories to draw out overarching themes, like parenthood, free will, and our relationship to a greater power,” Behrmann said. For instance, there are some events and characters that aren’t found in the Bible.

Despite its religious content, the show has a widespread appeal, according to Behrmann. “It’s a good story. Regardless of your religion, you can come and see the show and feel satisfied with the message,” he said.

One interesting thing to note is that all of the lead performers are either seniors or freshmen. The five principal actors are Jacob Allen, Matt Murphy, Jennifer Nummerdor, Juliana Speiser, and Jonathan Hinke. Of the remaining 14 players, six are dancers, and the rest have smaller roles.

“It’s been incredibly fun getting to know the freshmen and finding out how talented they are,” Behrmann said. “It’s also been a real joy to work with some of the veterans, people who can really get in there and have fun.”

Every position in the production is filled students, including choreographer and student Erin Smith, who has “been really crucial to the process,” according to Behrmann, because of the show’s strong dance component.

“We have some really, really talented dancers, and there’s a lot of modern dance throughout the show,” he said.

Behrmann has thoroughly enjoyed the position of student director. “It was very comfortable to work with my peers because the cast is widely talented, and they are also eager for the success of the production,” he said. “Everyone involved has been so supportive and so enthusiastic, and they’ve been willing to step forward and do their part.”

Behrmann is also very happy that he chose Children of Eden as his senior project. In one sense, it fulfills LUMP’s mission in presenting a more modern musical that the theater department doesn’t typically offer.

He is also a fan of the show: “I absolutely just love the show,” he said. “I haven’t met anyone who’s been in it and not loved it.”

Children of Eden opened last night, but there are still two performances left. It will be performed tonight and Saturday, both at 7:35 p.m. The show will be held in Stansbury Theatre, with free, general admission tickets required.