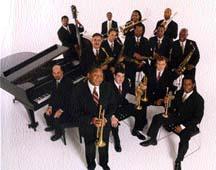 Wynton Marsalis and the Lincoln Center Jazz Orchestra returned to Appleton this past Monday to serenade a full crowd at the PAC.
Peter Gillette

Wynton Marsalis and the Lincoln Center Jazz Orchestra returned to Appleton this past Monday to serenade a full crowd at the PAC. (www.cosmopolis.ch)

Jazz musicians, critics, and appreciators have been arguing with and about Wynton Marsalis for over 20 years now. To many of his detractors, Marsalis comes across as a stuffy reactionary, who, if he had his way, would burn all hip-hop and rock records, stand in their ashes, and play some Duke Ellington.

But Marsalis has one crucial advantage over his critics: he shuts up and plays. He plays well, he plays hard, and he plays often.

Marsalis and his Lincoln Center Jazz Orchestra swung through town Monday evening, stopping at the Fox Cities Performing Arts Center as part of the LCJO’s “Year of the Drum Tour.”

Yes, as the title suggests, rhythm was the name of the game. The first set featured music associated with Marsalis’ mentor, the drummer and longtime bandleader Art Blakey.

Monday’s concert was more small group-based than the concert the LCJO gave in the Memorial Chapel in October of 2001. Consequently, the concert lived and died on the quality of the solos. Death, of course, is a relative term here; even the least exciting of solos was still executed with professionalism.

The LCJO set opened with a bang. “Arabia,” a Blakey tune, began with a few shotgun blasts of virtuosity from the horns, and then settled into solos. Marsalis soloed first, the first of many solos during the evening. His solos-from “Arabia” to the free jazz piece “Ramblin'” by Ornette Colman, to Jelly Roll Morton’s “Jungle Blues”-were grounded by a remarkable sense of groove. Few musicians can project such pure time and feeling by a few well-chosen notes.

I must admit, I started to get a bit bored toward the end of the Blakey set, which included a faithful reading of Timmons’ “Moanin,'” “Free for All” by Wayne Shorter, another notable Blakey alum and recent LU visitor, and “Three Blind Mice.” Around this point some of the solos, from piano and tenor sax especially, started to ramble.

Then came “Ramblin’.” Marsalis and Wessell “Warmdaddy” Anderson came out swinging with-gasp!-a spirited rendition of an Ornette Coleman “free jazz” classic. Wynton and Wessell were rhythm machines, moving in and out of chords and keys, but always staying a split second away from the dead center of the groove. To me, the concert was alive again.

From then on, the LCJO returned to its bread-and-butter full band grooves, starting with trombonist Ron Westray’s arrangement of “Don’t Be Afraid, The Clown’s Afraid Too,” originally by Charles Mingus. Westray used the power of the group to convey what can be described as frightening reconceptions of cartoon music.

Ironically, the most spirited playing of the evening came next, on the tune that would become a museum piece in most bands’ hands, Morton’s “Jungle Blues.”

Marsalis and company were in their element, shouting encouragement at one another, and reveling in Victor Goines’ powerful clarinet solo-the best of the evening, in my opinion.

Goines balanced groove, crowd-pleasing high notes, and musical restraint, building the room up to a fever pitch of old-time swing.

The band brought things down with “La Spada de la Noche” by LCJO tenor saxophonist Ted Nash. The piece moved from a lush ballad section into a fast flamenco groove over which Anderson blew his most intense choruses.

“Hank’s Symphony” closed proceedings. Fittingly, it featured Riley, who put on a clinic of how to be unobtrusive and in control at once. His solos were virtuosic in their power but melodic in their content.

And in one of the concert’s best musical moments, Riley and trumpet player Ryan Kisor played together for a few minutes, each playing perfectly in time with the other.

All in all, Marsalis came to play. The band may have played second fiddle from time to time, and the first half didn’t always seem spirited. But the LCJO at its worst is still an ensemble of virtuosos; seasoned professionals and young guns sit side by side, and aren’t afraid to give a good show.