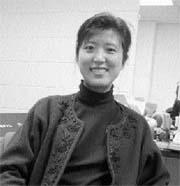 Seong-Kyung Graham is the former assistant conductor of the Lawrence Symphony Orchestra. She was released from her contrac, set to expire in July, prematurely on Feb.9th.
Beth McHenry

Seong-Kyung Graham is the former assistant conductor of the Lawrence Symphony Orchestra. She was released from her contrac, set to expire in July, prematurely on Feb.9th. (Julien Poncet)

Seong-Kyung Graham, formerly Assistant Conductor of the Lawrence Symphony Orchestra , was fired from the Conservatory of Music on the morning of Mon. Feb. 9. Although the motivations behind Graham’s dismissal are unconfirmed and confidential, the incident has raised concerns among faculty and students.
Graham, who began her recent position during the fall of 2002, was discharged almost six months before her two-year contract was to terminate in July of 2004.
Although the administration is legally bound to keep matters of employment private, students and faculty were troubled by the secrecy surrounding Graham’s dismissal and the reasons behind it. An anonymous student commented, “The rumor most commonly floating around the Con is ‘rudeness towards students and faculty,’ but I have yet to meet any faculty or students who thought she was ever rude to anyone.” A conservatory professor, also speaking under condition of anonymity, said, “We were all shocked…No explanation was given to the faculty.”
Few musicians attribute Graham’s release to her abilities as conductor or her behavior. The conservatory professor said of Graham, “Over the last six years that we have been hiring assistant conductors for LSO (Lawrence Symphony Orchestra), she is by far the best.”
Claire Weiss, a cellist in LSO, said, “It’s sad that Ms. Graham had to leave. She was a great conductor.” Bonnie Alger, a violinist, commented, “I enjoyed working with Ms. Graham. She’s an extremely hard worker, an intelligent musician, and a great conductor.”
Graham’s dismissal came several weeks after a public quarrel between Graham and Bridget-Michaele Reischl, Associate Professor, Kimberly-Clark Professor of Music, and Director of Orchestral Studies. On Tuesday, Jan. 27, Reischl reprimanded Graham in the presence of students before orchestra rehearsal.
Students reacted differently to the public disagreement. Some orchestra students felt uncomfortable while others were less affected. One orchestra student said, “We all tried not to watch as Ms. Reischl yelled in her face and belittled Ms. Graham. To see this happen was extremely discomforting and upsetting to me and several other orchestra members, and for several days afterwards it was the buzz of the ensemble.” Another student, Mike Swanson, commented, “Ms. Graham was trying to defend herself and to argue back, but whatever caused [the argument] I don’t think was really any of my business.”
Several professors expressed shock at the argument. One conservatory professor described the argument as “totally inappropriate. In Boston and New York, people would not tolerate that.” The professor later added, “Reischl is praised for her vigor. [She] is an energetic conductor, but that energy can transfer to aggression towards students and faculty members occasionally.”
Reischl later spoke to the orchestra committee, a group comprised of students representing each section of the orchestra. According to Swanson, a student member of that committee, Reischl “said several times that she was sorry that [the argument] happened in rehearsal…and that we had to see it.” He went on to say, “[Reischl] said she wished that she could explain [the situation] to us so that we would understand it better,” but that she could not due to legal reasons.
Some professors and students hope to see an administrative investigation into Graham’s firing. Several conservatory professors are concerned that an apparent disregard for reason and rationale in this matter indicates a particularly low level of job security for non-tenured employees. A professor commented, “People should know about this and it should not be tolerated.” This same professor told The Lawrentian that a group of conservatory professors has already met with President Warch to discuss Graham’s dismissal, but would not comment further on the subject.
Initially, several conservatory faculty agreed to speak to The Lawrentian under the condition of anonymity, but later requested not to be quoted for fear of repercussions.
Graham is currently applying for jobs nationwide. She holds no animosity towards Lawrence and says, “I am truly grateful for the time that I had spent with studentsTand the faculty at Lawrence and the relationship that I have with them.TThat will remain unharmed and invaluable.”
Regarding the changes that will take place to fill Graham’s absence, Reischl addressed these concerns with the orchestra committee, saying that changes will be manageable. According to Swanson, “As far as her explanations of how orchestra is going to run the rest of the year without an assistant conductor, she had good answers to everything that we asked.”
Despite the general confusion and expressed alarm regarding Graham’s dismissal, faculty and administration cannot confirm or deny details of personnel decisions. Most faculty and administrators including Reischl, Kathleen Murray, Dean of Faculty and Dean of the Conservatory, and Barry Hoopes, Director of Human Resources, were unable to comment due to employer etiquette and legislation regarding personnel privacy.
Additional reporting by Jessie Augustyn, Jonathan Isaacson, and Devin Burke.