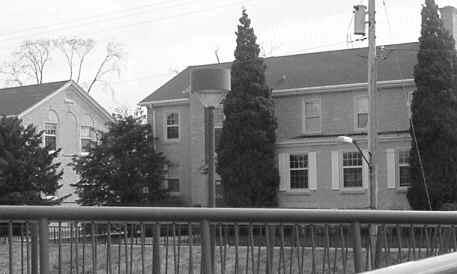 Representatives from the Board of Trustees and national representatives from the fraternities of Delta Tau Delta, Sigma Phi Epsilon, Beta Theta Pi, and Phi Delta Theta met on Wednesday, April 26 to discuss the future of the fraternity system at Lawrence. The meeting was the result of concerns over the future of the fraternity quadrangle, which is currently a potential site for new construction on the Lawrence campus.
Recent meetings with Sasaki Associates, the architectural firm hired to plan for the new construction, have revealed that one possibility for a new union would be to build over the Phi Kappa Tau and Delta Tau Delta houses. The new union would also require that Hulbert House be razed, so that the union could span the length from the Phi Kappa Tau house to Hulbert House.

Proposed changes include razing this section of the Quad and Hulbert House.
photo by Andrew Karre Proposals for a new union result from the Board of Trustees decision to examine and improve housing at Lawrence. In 1998, Board Chairman John Luke, Jr. initiated a comprehensive review of residential life at Lawrence to determine “if current policies and practices in this area are consistent in furthering Lawrence’s mission of liberal education.” A task force was formed to consider the matter and work with the board to provide equitable housing. In its January 2000 response to the task force’s interim report, the board endorsed “the following working principles on equity”:

(1) Lawrence students may freely associate and form student groups and organizations of their own choosing (including Greek-letter social organizations).

(2) The allocation of college-owned housing should be based on clear and equitable rules.

(3) No student group or organization should have a permanent claim to occupancy in any unit of college-owned housing. Existing claims should be resolved equitably.

In a letter dated October 20, 2000, the board stated, “In particular, the administration, working in concert with the board, should continue negotiations with representatives of Greek-letter social organizations, with the goal of ensuring that existing claims are equitably resolved and that students in those organizations share in the benefits of the planned enhancements to residential life.” The recent Formal Group Housing proposal, if approved, would require that all organizations meet certain criteria to have a house, ensuring the Board’s goal of equitable housing. This would also apply to Greek organizations and would not assure the groups of housing in the current fraternity quad.

Though President Warch, the national fraternity representatives, and Lawrence chapter presidents were unable to comment on Wednesday’s meeting, the Lawrentian has been informed that it will receive a letter from the national representatives commenting on the matter for next week’s issue.