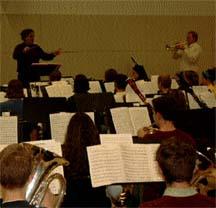 The Lawrence Wind Ensemble rehearses with John Daniel in preparation for their upcoming concert on Nov. 16. (Sandi Schwert)

This Saturday, Nov. 16, at 8 p.m. in the Memorial Chapel, Robert Levy will conduct the LU Wind Ensemble and Symphonic Band in a concert featuring the creative work of two members of the Conservatory faculty. Highlighted in the concert is guest soloist John Daniel, Lawrence trumpet professor, and guest composer John Benson, Lawrence composer and theory professor. The concert is a prime example of why Levy is known as a strong supporter of unique composers and performing artists within the Lawrence community.

In the past several months alone, Robert Levy has drawn attention to other Lawrence artists by promoting a Lawrence Brass concert, a chamber music concert featuring the music of John Harmon (’57), and a recording session of a new wind ensemble piece by student composer Ben Klein.

Soloist John Daniel, also featured in the two aforementioned concerts, will return to the stage in the piece Concerto in F by Almicare Ponchielli (1834-1886).

Daniel arrives at Lawrence from Penn State University, where he taught for nine years. No stranger to the limelight, Daniel has performed with many orchestras, including San Angelo Symphony, Abilene Philharmonic, San Antonio Symphony, Pennsylvania Ballet, and the Broadway revival of “Annie Get Your Gun.”

Ponchielli’s Concerto in F means a great deal to Daniel on both a professional and personal level. The piece was brought into prominence about 20 years ago through a recording by one of Daniel’s most influential teachers, Armando Ghitalla. Ghitalla was the principal trumpet of the Boston Symphony and Boston Pops for many years. Ghitalla passed away last December.

“He was not only a great artist and teacher; he was a warm and wise person,” Daniel describes. “My frequent thoughts about my former teacher and friend motivate me to play this piece again.”

It is also interesting that Daniel’s first meaningful contact with Robert Levy occurred at a one-week master class taught by Ghitalla. “So this performance is not only in memory of an old friend and teacher, but a celebration of my new friends and colleagues at Lawrence,” Levy said

Following John Daniel’s feature in the concert is the world premiere of John Benson’s piece Ancient Winds. Benson holds degrees from the Universities of Wisconsin, Minnesota, and Washington, and has been serving on the Lawrence faculty since 1997. He is also a recipient of the Charles Ives Prize from the Institute of Arts and Letters.

The piece’s title is a tribute to the influence that early music has on the composition. Benson uses many old compositional techniques like canons, themes and variations, and dances to structure the work. However he positions and overlays them in a way that inspires unique sound blends. Benson hopes the listener will “enjoy the quick changes of color and metric overlays which permeate the piece.”

Benson has particularly enjoyed the task of writing for the unique sound of a wind ensemble:

“It was a challenging experience because I hadn’t addressed timbre as an organizing force, and the wind ensemble presents one with a rainbow of colors to contrast and blend. It is such a dynamic instrument, with the ability to whisper and explode with the fury of a volcano,” said Levy.

Levy’s service to the Lawrence Conservatory has been generous and exhaustive. As Director of Bands since 1979, he has sought unique performance opportunities and creative programming, such as the concert on Saturday.

Premiering over a hundred works, many written expressly for him, Levy has always been at the cutting edge of new and exciting music. His work as a performer, conductor, and composer has made musical milestones throughout the United States, Canada, Australia, China, Jamaica, and Haiti.

In his final years at Lawrence, Levy continues to bring unique and exciting music to the concert hall. He will surely be missed, and his flare for creativity will not be forgotten.

Jonathon Roberts The Lawrence Wind Ensemble rehearses with John Daniel in preparation for their upcoming concert on Nov. 16. (Sandi Schwert) This Saturday, Nov. 16, at 8 p.m. in the Memorial Chapel, Robert Levy will conduct the LU Wind Ensemble and Symphonic Band in a concert featuring the creative work of two members of the…