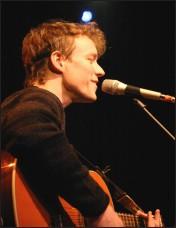 Alan Sparhawk singing at the Miramar Theatre in Milwaukee on Thursday, Jan 26

As the fads and styles in the indie rock world move in and out with the tides of their perceived popularity,
it seems that so many artists have drowned in the wake of fashion. On the other hand, there is a lingering pressure for bands to consistently reinvent themselves
with each release. For Duluth slo-core rockers Low, their musical career has seemed to breathe and grow with the same delicate pace of the songs that have won them such adoration. Alan Sparhawk and wife Mimi Parker have been nurturing their musical aesthetic since the band’s conception in 1994, with the gentle patience of, well, a mom and dad. With two children and an open religious affiliation, Sparhawk and Parker have maintained the confidence and brutal honesty to allow their sound to grow and develop. It’s this natural
and sometimes painful affinity for honesty that has earned Low a strong mainstay in the rock scene.
Their most recent album, “The Great Destroyer,” was released on Sub Pop records last year and turned a lot of heads with its more aggressive
sound and relatively upbeat songwriting.
When asked if this seeming departure was a conscious decision, Sparhawk made it clear that they had no such aims. “I had 20-some songs written for the record,” he said, “and the only ones that I felt were really alive at all where the more aggressive ones.” It was clear from hearing him speak of the record that “The Great Destroyer” came from a different frame of mind for Sparhawk. “The only way I can explain it is that most of the other records that I’ve written have been a third person looking back, whereas the songs on this record didn’t have any of that.”
He referred to “Destroyer” as a more frantic record, which is not necessarily the feeling one would take from a first listen.
However, there is a sense of jadedness that emerges from the lyrics that latch onto the pop hooks and catchier rhythms. Sparhawk explains, ” The cynicism came out of nearsightedness
of the moment and being unable to see – the moment when you don’t really know what the hell’s going on. When you get that way it’s hard to take on.” He added, “To be this old kind of shakes the foundation
a little bit.”
In a recent interview with Pitchfork, Sparhawk revealed that the cancellation of their U.S. tour this summer was due in part to personal drug addictions. Coupled with the departure of their longtime friend and bass player Zack Sally and the awkward transition from indie rock stars to more or less veterans of the scene, 2005 proved to be one of acceptance and perseverance for Low.
Just before embarking on their current
tour of the states, Sparhawk was weary of the ups and downs experienced
on the road. “We’ve been a touring active band for some time,” said Sparhawk. “Some things get old. There’s some trepidation when you’ve been doing this for a long time.” This is also the first tour without Sally, which may have added to the group’s anxiety about going out on the road. “It’s inevitable
that peoples’ lives will change for different reasons,” he added. “We are what we are, and Mimi and I still feel confident about what we’re doing.”
Low kicked off their tour Thursday, Jan. 26 at the Miramar Theatre in Milwaukee. The modestly sized venue was drenched in subtle guitar sweeps and delicate vocal harmonies throughout
the set, portraying a kind of microscopic
beauty that is absolutely pervasive
in their live shows. The weariness and trepidation seemed to melt away beneath the stage and all that remained was a few musicians doing what they were meant to do. The trials and woes that have been encircling Low this past year are no match for the simple beauty of truly honest music.

Paul Karner Alan Sparhawk singing at the Miramar Theatre in Milwaukee on Thursday, Jan 26 As the fads and styles in the indie rock world move in and out with the tides of their perceived popularity,it seems that so many artists have drowned in the wake of fashion. On the other hand, there is a…