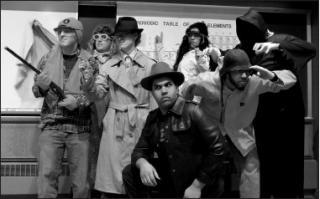 In the 14 years that Bomb Squad has been around at Lawrence, one thing has never changed: the group still ends every performance by puncturing a hydrogen-filled balloon with a candle, creating a loud boom and a ball of fire that floats to the ceiling. Bomb Squad is a student group that puts on chemistry shows to excite elementary and middle school kids about chemistry. The shows follow a script that connects the chemistry demonstrations with a storyline. There are also comic improvisations added in, so all the cast must be quick thinkers. There are eight to 10 members from year to year, but only five or six are needed for a single show. The cast rotates so each group member can play all the different character parts. Bomb Squad puts on six to 10 shows per year at Lawrence, with an average of 100 pupils attending. The group also does a show each year at the Fox Cities Children’s Museum, and performs once a year at a local school during Science Day. The shows at Lawrence are put on in Youngchild 121 during the lunch hour.
Senior Matt Kornis, co-leader with Ben Hane, said this year’s script is brand new. It is about an Indiana Jones character that is searching for treasure. A periodic table, a phantom and some molecules help him in unlocking the treasure chest. Some of the other characters include a fisherman with a pirate accent, a private investigator who works with lumenol – used to detect blood splatter, but not in these kid-friendly demos; and a fluorescent being with a blue wig, bright yellow cape, red shirt and pink sunglasses. Kornis said he likes the fluorescent being the best out of all the characters.
Though the Bomb Squad has been low-key over the years, they would like to become better known throughout campus. Only three of the current members aren’t graduating this year, so the group is looking for new members. Students of all majors are welcome to join; only half of the members right now are science majors. Most members have an interest in science, enjoy performing, or just like kids. Since the demos are geared for kids, they aren’t hard to learn.
Bomb Squad encourages everyone interested in joining or just wanting to check the group out to stop by during a meeting. The group meets Tuesdays at 8 p.m. in Youngchild 121. Meetings last about an hour, beginning with 10 minutes of improv exercise to maintain quick thinking skills. So stop by and check them out . who knows, they might just show you one of their new demos: Gummy Bear Torture.

Emily Alinder The Bomb Squad uses improvisation to entertain while educating (Matt Kornis) In the 14 years that Bomb Squad has been around at Lawrence, one thing has never changed: the group still ends every performance by puncturing a hydrogen-filled balloon with a candle, creating a loud boom and a ball of fire that floats…