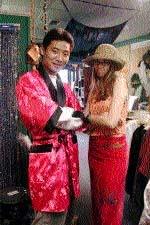 On Sunday night, the Buchanan Kiewit Center will be filled with sights and sounds that are generally rare in Appleton, Wisconsin. Lawrence International (LI) will present its annual Cabaret, an extravaganza of international food, entertainment, and costumes, to 400 eager Lawrentians and Appleton residents at 6 p.m.Cabaret 2004 will represent 50 nations and includes a fashion show and 11 performances, including belly dancing, poetry reading, a gospel choir, and dances from nations such as Africa, Jamaica, Latin America, Palestine, and Japan.

Patrons at Cabaret on Sunday night will also enjoy a smorgasbord of international cuisine from seven regions represented by Lawrence’s international community – the Caribbean, Latin America, the Indian subcontinent, Africa, the Middle East, Europe, and Asia.

This year, Cabaret’s theme is “Expanding Your Horizons.” Roshal Erskine, one of seven LI board members in charge of making Cabaret a success, says “We want to promote stepping beyond what you know or even what you are comfortable and familiar with, getting to know others, and embracing their differences.”

LI has been introducing international culture to Lawrence and the Appleton community for 28 years, through the variety of food and talent showcased in the Cabaret.

According to Erskine, “Cabaret is held by LI in service of our constitution that charges us with the responsibility of educating others of different races and cultures with the view of promoting tolerance, acceptance, and understanding of those that are different. Other programs also promote diversity, but we are the only one at Lawrence that does it on such a wide scale through entertainment and fine cuisine.”

As evidenced by the ticket sales, Cabaret is a popular event at Lawrence and in the Appleton community; LI sold all 400 tickets almost a full week before the show. Students, faculty, and staff members look forward to Cabaret each year. Staff member and Lawrence alumni Jenna Stone expresses the positive opinion held by most on campus, “The food alone is worth the price of the ticket, and the entertainment is a great way for Lawrence’s international students to show off their talents and share the traditions of their homelands.”

Sophomore Christina Martinez has gone from an audience member last year to an active participant in Cabaret this year. “Cabaret is such an excellent program for students on campus and for the Appleton community as a whole. It is such a great opportunity to catch a glimpse of some of the other cultures that we would otherwise never experience or even know about,” says Martinez. “I personally love being among all of the colors, languages, dances, and music. The food is delicious, the people are great, and it’s also an entertaining, educational excursion around the world!”

Planning and presenting a performance of this magnitude is time-consuming. Erskine says that the LI board spent most of its time since January preparing for Cabaret. Tasks include preparing the menu, the banners, and the decor, publicizing, getting the equipment, locating the acts, and trying to do all this with a limited budget.

Cabaret is also an expensive endeavor. Other LI events throughout the year, such as formals, supplement the LUCC funds appropriated for LI. Most of the money earned through Cabaret will go to next year’s LI board to jumpstart these fundraisers, which will, in turn, pay for next year’s Cabaret.

“It’s hard to prepare a show for 400 people but we depend heavily on LI members to help us along the way and they do a wonderful job,” says Erskine. LI also relies on students and the capable Downer staff to prepare enough food to feed 400 guests. Erskine, like other board members, worries during the process of preparing for Cabaret but says that seeing it all come together on Sunday is well worth the effort.

Doors will open for Cabaret at 5 p.m. on Sunday, May 2. The show begins at 6 p.m. A very limited number of tickets are available at the door for $12.