World government is not as easy as it seems; at least according to Ady Hate.Early this month, Lawrentians Ady Hate, Pete Snyder, Tamika Watson, and Kora Buettner joined 3,000 delegates from around the world at the New York National Model United Nations Conference. Amid hectic deal-breaking and frantic conversations, these students earned an appreciation for the tumultuous daily lives of diplomats around the world.

The delegates were the first from Lawrence to participate in a full United Nations (UN) simulation, where they worked with other high school and college delegations – each representing a different country or non-governmental organization (NGO) – to resolve conflicts and approve resolutions in the same manner as actual representatives at the UN do every day. The delegates participated in committees and prepared working papers and resolutions for a simulated meeting of the General Assembly at the actual UN facilities in New York.

The simulation – which replicated a General Assembly meeting in detail – was designed to give students experience representing nations of every size, and the Lawrence delegation was posed with a considerable challenge.

The Lawrence delegates represented the Republic of Kiribati (pronounced keer-ree-bhass), a nation of 98,000 people located near the Marshall Islands and only four times the size of Washington, D.C. in size. As representatives of such a small nation, Buettner and Snyder – as Americans – found the experience particularly eye-opening.

“If you’re not the United States or some other global economic power, it’s easy to be forgotten,” Snyder remarked. Buettner stated that she now realized just how dominant the United States is in the international community, and that she found the experience of representing a much smaller nation “humbling.”

Watson and Hate found that the conference had direct applications to their coursework in government. “We were able to apply what we’ve learned in class,” Watson remarked. Hate similarly said, “All of my classes came together, and we saw how what we’ve learned applies in reality.”

Model UN was created by the United Nations to promote its worldwide efforts, raise awareness of global issues, and also to encourage high school- and college-aged students around the world to eventually work for the United Nations.

The Lawrence chapter of Model UN sponsors and participates in several campus events each year. From celebrating International Women’s Day to sponsoring forums on the relevance of the United Nations, the members of Model UN continue to raise awareness of international events and problems that significantly influence the politics of every nation in the world.

The Lawrence chapter of Model UN was founded in 2001, and hopes to send delegates to conferences in New York and Chicago next year. During their meetings, members of Model UN discuss current international events and their research into different nations. They meet regularly on Tuesdays at 9:30 p.m. in the International House. 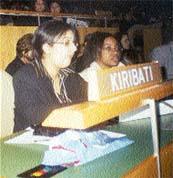