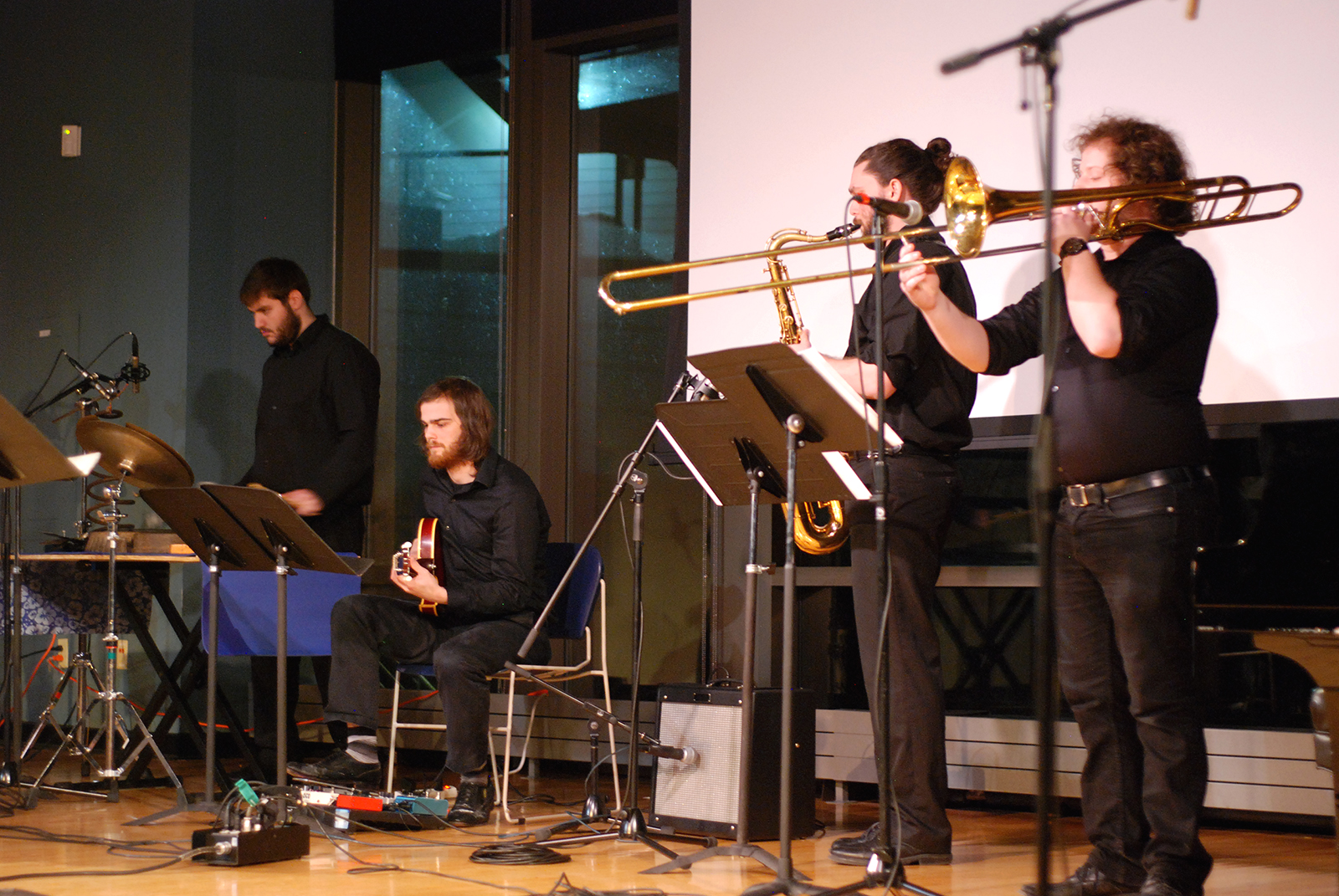 Tucked away in the Esch-Hurvis Room on Friday night, Jan. 20, was Visiting Assistant Professor of Music Andrew Cole’s composition recital. With a thoughtfully put-together program exploring the places Cole has lived, the five pieces also showed the complex inner workings of his brain. With unique techniques, Cole’s compositions built up soundscapes that reflected both their physical and geographical inspiration and also the composer and musicians playing them.

A flute and video duet opened the concert, documenting Cole’s time in Baltimore. With energetic flute calls paired with mesmerizing footage of factories, trains and other bustling city life, I was transfixed on how the sound and visuals impacted each other. Based on what I was seeing in front of me, my perception of the flute changed—a chameleon to the video. At a few points, I found my eyes glued to the video and my ears glued to flute, and I could not bring myself to take notes.

The next piece was visually and instrumentally very different. Instead of glowing visuals in front of the audience with one instrument, “AroDreamscape” left us in the dark, surrounded by four saxophones and several speakers. Composed to replicate the beautiful chaos Cole heard living near a bird sanctuary in New Zealand, the piece incorporated live electronic manipulation of the quartet, sputtering and tweeting out of the speakers surrounding us. The acoustic and electric melded together wonderfully, instilling calmness with ample activity—a musical paradox Cole tends to use a lot.

It was heartwarming to see improvisatory quintet Levels back together for this piece. (Their violist graduated last year and have since been on hiatus) They had played this piece, commissioned for them previously, but after several months—and it being heavily improvised—the performance was fresh. Had he not specified it was influenced by Appleton, it would not have been too difficult a task to figure out, as impressions of the infamous train’s bellowing harmonies and city’s industrial aesthetic clouded the room overbearingly. My stimulated ears were matched with stimulated eyes as I found myself following the cords on the ground, creeping up to microphones, music stand lights and speakers. While not intentional, the intricacies of the cables snaking their way around the room echoed the sonic walls around me.

The only piece on the program to use electronics and no live instruments, the fixed media soundscape built upon Cole’s original compositional voice as an artist who can use both the acoustic and electronic in his palette effortlessly. By using field recordings of hikes he took in New Zealand and molding them—or not—to whatever he wanted, Cole recreated the world of Wellington while also creating worlds unheard of. My eyes were closed the entire time, and there was seldom a moment I actually felt like I was in Esch-Hurvis. Transporting and otherworldly, the piece was also an intense exploration of Cole’s brilliant use of natural sounds to make something unnatural.

The depressing but powerful closer, the duet for piano and video found Cole back in the U.S., specifically Missouri. While the video stopped working near the beginning of the piece, piano and electronics soldiered on with a blend of sadness, anger and doom. Unlike the rest of the program, the piece brought out the sheer virtuosity of the featured instrumentalist, sophomore pianist Evie Werger. Werger seamlessly bound together the slow and solemn to the busy and intense, not once hindering the barreling forward momentum Cole constructed. As if her playing was not enough, the composer interjected with live electronics twisting her phrases and piling up notes viciously.

It is rare to see recitals that are so well put together that the entire program feels like a larger work in itself, but it was apparent Cole did not shy away from that idea. Not only did he create a cohesive performance, but his work shows as a high example of the melding of acoustic and electric in composition. A selection of Cole’s works can be heard on his website, twocomposers.org/andrew/works.php.