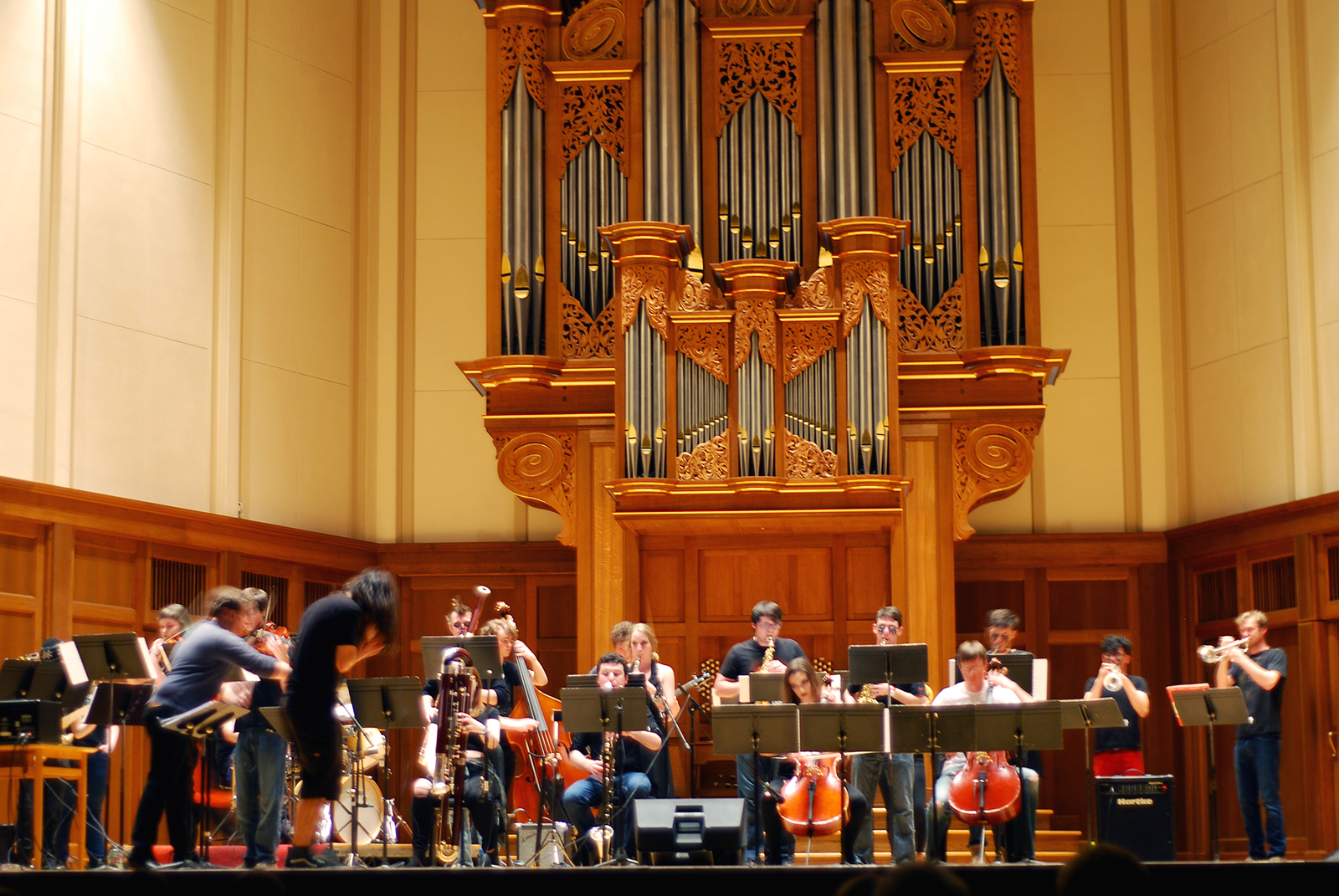 The Heavy Metal Ensemble of Lawrence University (HMELU) performs in the Chapel.
Photo by Taylor Blackson

On Saturday Feb. 17, the Heavy Metal Ensemble of Lawrence University (HMELU) performed its 2014 album “Resurrection Opus” for an animated crowd in the Lawrence Memorial Chapel. The metal orchestra, which describes itself as a “sonic behemoth,” is made up of over 20 musicians playing all types of instruments.

After a hiatus since 2007, HMELU was rebooted in 2011 by Calvin Armstrong ’14. After Armstrong graduated, the group disbanded until 2017. Over the most recent winter break, senior Dom Ellis and junior Izzy Yellen took action to resurrect the group a second time. For their return concert, they brought back “Resurrection Opus,” a cohesive album made of covers of preexisting metal songs.

“Resurrection Opus” was originally designed and performed under Armstrong in 2014, but 2017’s new incarnation of HMELU features a different make-up of instruments, so the songs’ arrangements were redone by Ellis.

HMELU’s 20 musicians are a mix of conservatory and non-major instrumentalists and vocalists. They have robust brass, wind and string sections as well as two percussionists and several guitarists.

The group showed incredible energy and passion during their performance. Each member, adorned in dark clothes and face paint, rocked in time to the thrashing rhythm section. The raging vocals were handled by Ellis and Yellen; they traded off depending on the style of the song.

Many of the songs were dark and ominous, but some included atmospheric relief passages to provide contrast to the otherwise unbroken heavy bass lines. Songs featured a variety of keys and meters and often included virtuosic solo passages for instruments such as cello, saxophone and guitar.

It may seem difficult to imagine heavy metal played on a clarinet or saxophone, but Ellis, who also conducted from center stage, arranged the songs in a way that blended all of the instruments together to create hard and heavy textures expected in metal music. The final experience was a well-mixed sequence of songs that really took advantage of the unique instrumentation available.

“Resurrection Opus” brought in an audience with varying levels of exposure to heavy metal; many newcomers just wanted to see what an orchestral metal ensemble would sound like. Over the course of the concert, a small, rowdy crowd developed at the foot of the stage even though people were hesitant to dance and move in the Chapel, which is normally a space for formality and thoughtful silence.

Yellen handled the coordination of events and rehearsals. HMELU practiced all term, and as a result, their concert was tight and clean. There were no pauses, restarts, or technical difficulties, even though it was difficult to set up amps and equipment on the Chapel stage.

Without significant student interest and energy, an ensemble like HMELU could never happen. The sparks of excitement lighting this event are surely indicative of a productive and exciting future for HMELU. The group plans to continue performing for the rest of this year and beyond.