This Month in Lawrence History: April 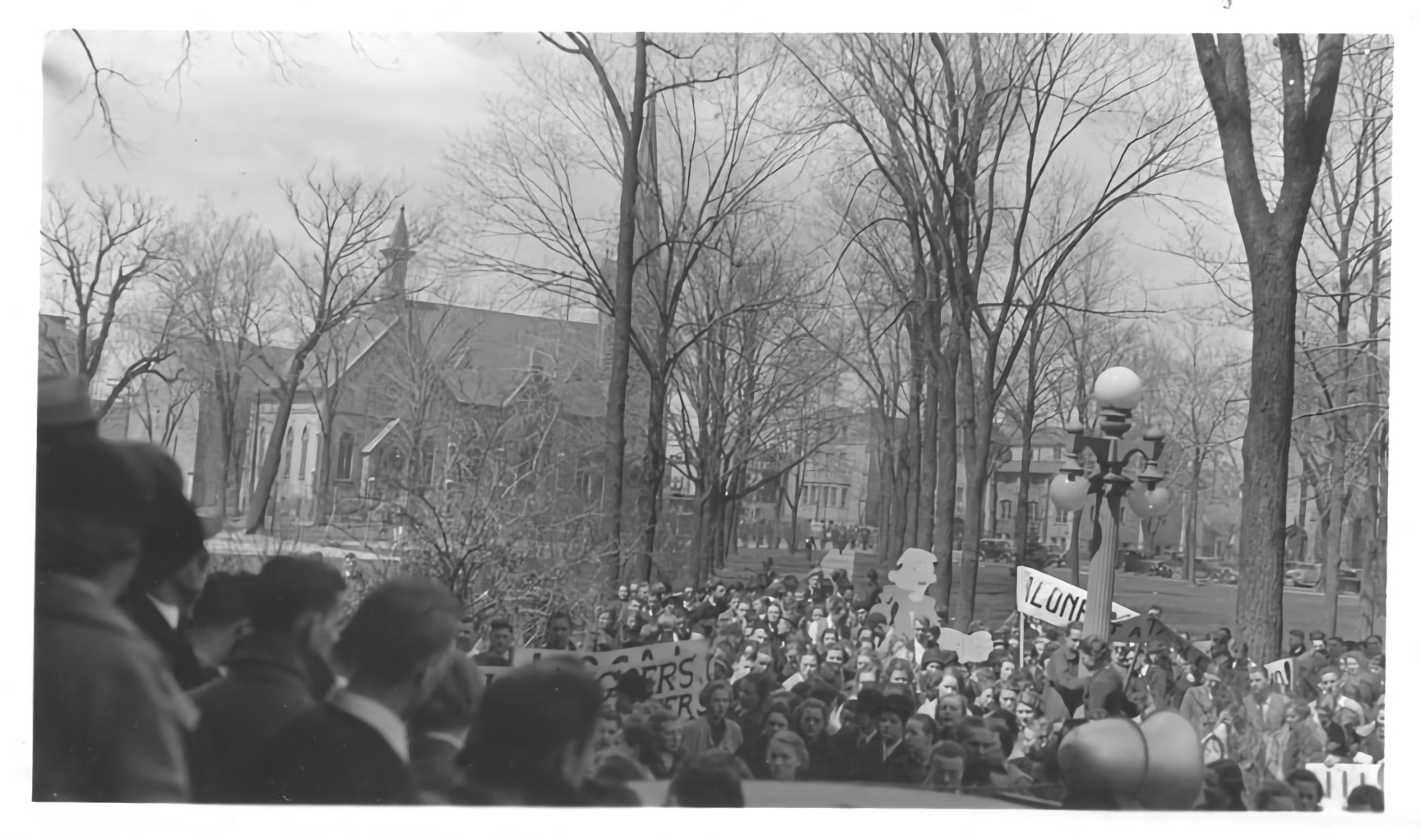 Lawrentians intended to march down College Avenue as part of a nationwide anti-war demonstration in 1936.

The feelings of excitement and liveliness are spreading across campus as spring term is beginning on campus. Students can finally go outside without having our faces go numb to hang out in the sun, to say goodbye to wearing layers upon layers of clothing and to embrace that there is only one more term until summer. The month of April not only gives to Lawrence today, but has done so throughout Lawrence’s history as well.

One of the best things about April is pulling some pranks and laughing with friends on April Fool’s Day. As per popular tradition in the day, students would participate in moving the infamous Lawrence Rock around to many interesting parts on campus. On April 1, 1957, a clever mind came up with the prank of putting a paper-mache version of the Rock on top of the then Stephenson Hall of Science. It proved to be a successful prank, as people thought it was the real Rock until someone went to the roof to get it.

April was also a big month for events that would still fascinate the current students on campus. The acclaimed pianist Vladimir Horowitz performed in the Memorial Chapel on April 5, 1930. He was one of many musicians to be a part of Lawrence’s Artist Series, which began in 1908. The Series aimed to bring outside performers to campus. On April 6, 1989, scientist Stephen Jay Gould gave a Convocation speech about genetic equality. Lawrence has not only brought in Gould to speak, but has also made Gould’s book, “Bully for Brontosaurus” a part of the Freshman Studies program in the past.

April also had its fair share of more intense moments as well. Students discovered a burning motor in Brokaw Hall on April 8, 1826. At 11 p.m., two students were in their room when they smelled the smoke coming from the motor. They quickly notified an advisor, and soon found a small motor in flames. If the students hadn’t noticed the smoke, the motor could have started a potentially devastating fire.

The tradition of a politically active campus was a strong part of Lawrence history in April. Students demonstrated with the Appleton community in a loyalty parade on April 9, 1917. The demonstration was a response towards President Wilson’s declaration of war on Germany. It was said to be both peaceful and very patriotic while being the biggest demonstration in history of the city.

On April 20, 1865, Appleton hosted a memorial service for President Abraham Lincoln in Lawrence’s Main Hall. This was five days after Lincoln’s assassination. People of Appleton closed their businesses for the day and walked in procession down College Avenue to the service.

Another thing that comes to mind when talking about April is Earth Day. On April 20, 2010, Lawrence installed the campus’ first solar panel on the roof of Youngchild Hall. This was to commemorate the 40 anniversary of Earth Day. It was made possible by two freshman students who applied for and received funding for the panel from Wisconsin’s Focus on Energy program and WE Energies.

Lawrence gained national attention on April 22, 1936 when 700 students from Lawrence were a part of a nationwide anti-war demonstration. Soon before the peace parade started, Appleton police revoked the students’ permission to participate in the parade. When a student dared to cross the corner of College Ave. and Drew St., he was clubbed by the police.

The month of April has brought many memorable events, both good and bad, to Lawrence throughout its history. As much fun as it would be to make a paper-mache of the Rock, there are plenty of wonderful ways to fully celebrate the month of April.