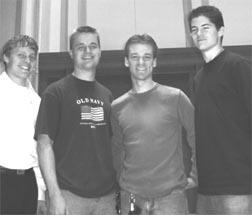 For the sixth consecutive year, a barbershop quartet from Lawrence University will be competing at the international level. Following in the footsteps of several other quartets from Lawrence, the barbershop quartet “Die Wunderkinder” has qualified to compete at the collegiate level at the annual International Convention of The Society for the Preservation and Encouragement of Barber Shop Quartet Singing in America (SPEBSQSA) to be held in Portland, Oregon during the week of July 1-5.

The group is made up of two voice majors and two non-majors. The members are senior James Estes and juniors John Gale, Trent Jacobs, and Sam Sather. The quartet came together only recently, beginning rehearsals around mid-February.

They rehearsed once a week during second term, but this term they have rehearsed twice a week in preparation for their competition. They have also had coaching and instruction from professor David Erb.

These musicians earned the honor of competing at the international level after winning a preliminary competition for their district in Oshkosh on May 4. Of the groups that competed, they had the highest score.

The district they will be representing is the “Land O’ Lakes” District, made up of groups from North Dakota, Wisconsin, Minnesota, the Upper Peninsula, Manitoba, Saskatchewan, and part of Ontario.

The group has recently performed at James Estes’s senior recital and the Phi Mu Alpha Sinfonia American Music recital. They hope to give a coffeehouse performance later this term and to continue performing and working together next year.

Their performance in Oregon will take place July 5.