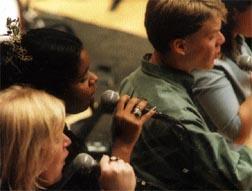 Jazz Singers co-director Chris Salerno sent the tape of Jazz Singers’ performances from the last two years to Down Beat. When the group members found out they won, they were surprised and elated.

“We’re all really excited about it,” said senior Ali Losik.

In fact, Losik had more reasons to be excited, because two of the three pieces on the winning tape were either arranged or written by her. Her composition “Soy Un Boligrafo” and her arrangement of “Lonely Woman” were combined with a performance of Darmon Meader’s “In the Silence of Time.”

The group is co-directed by Salerno and Assistant Professor of Music Richard Bjella. Earlier this year, their performances included memorable concerts with Bobby McFerrin and Uri Caine.

Later this term, on June 7 at 8 p.m. in the Memorial Chapel, they will be performing their final concert of the year with the Lawrence University Jazz Ensemble.

For the Jazz Singers, the ensemble carries its own challenges in that it changes nearly every term. For a tight ensemble to sing well together requires familiarity and a lot of work.

According to Bjella, “We like to hope that we’re getting the job done here, but to have Down Beat confirm that is extremely gratifying.”

Students are anticipating next year, particularly with Fred Sturm coming back to Lawrence. Losik says, “I think [the Jazz program] is going to explode in the next couple of years.”

With successes like the Down Beat awards, the Lawrence jazz program is making noise across the country.