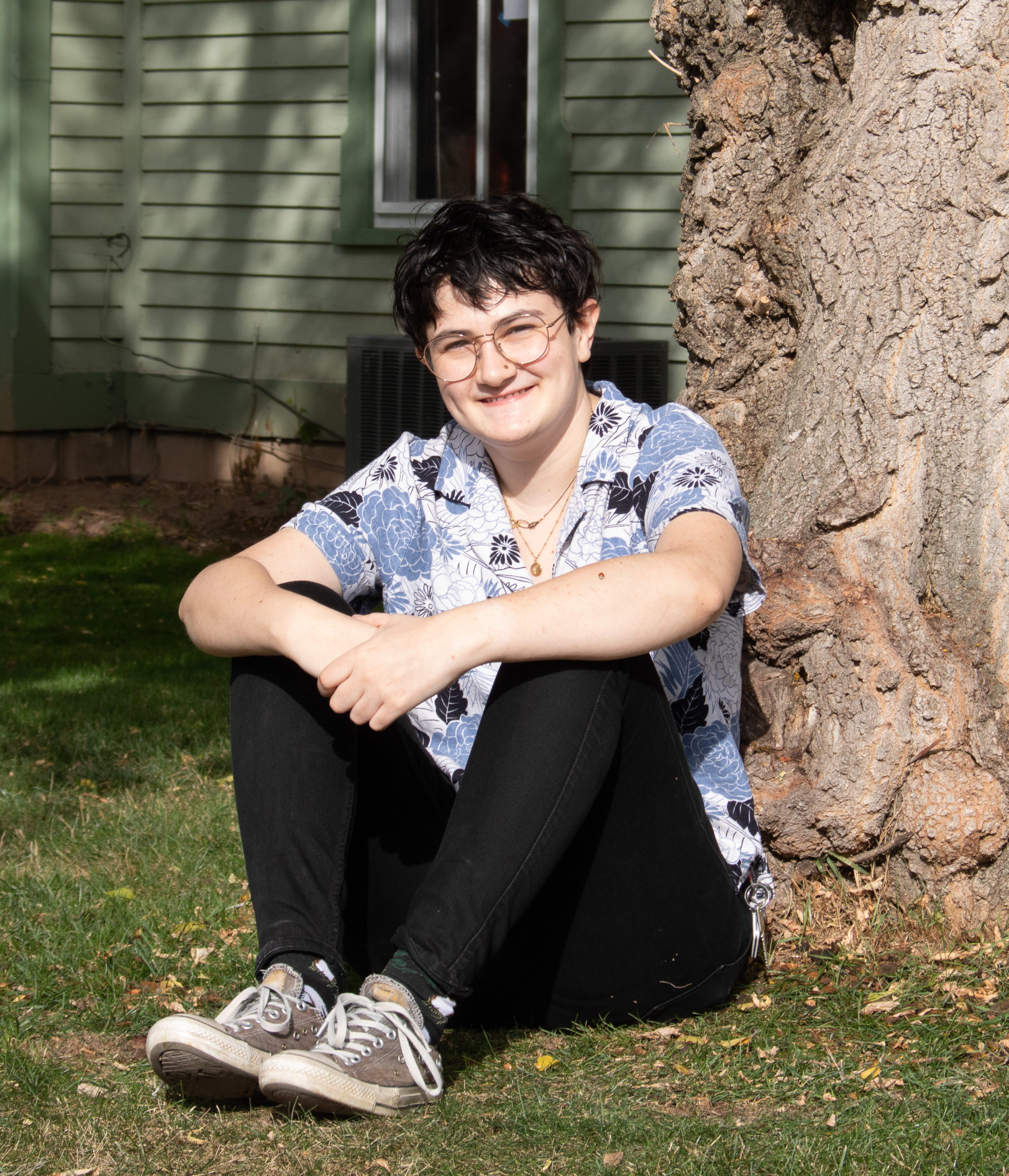 Grace Stahl shows her favorite reading spot under a tree between Draheim and Sabin House.

Subculture on Main strives to raise awareness of the diversity of people and important issues on the Lawrence University campus. Care is taken to give equal platform to unique individuals and to listen to their stories with an open mind. Interviews are reflective only of the interviewee on not of their whole group.

Conflict is often an occurrence in our lives, and for some conflict is ingrained in their very identity. Grace Stahl discussed this phenomenon as it has come up in her life. Stahl is a junior majoring in studio art and minoring in linguistics, grew up in a Christian household, rediscovered her Jewish heritage only a handful of years ago, and identifies with the LGBTQ+ community as a queer person. She began by noting that people can be divided into more and more groups, depending on how far you want to categorize. “I’ve never really felt as though I fit into one specific subculture,” she said. “I feel like I kind of bounced around. Maybe no one fits into one subculture.”

“I grew up doing whatever [I wanted regarding religious beliefs]. There is the Christian side of my family, and I feel like I’m on the outside [of it] because of my Jewish side,” she said. “My queer identity is often overlooked even within the queer community.” Stahl described how it feels to be marginalized by one’s own groups not because of race but for inexperience and conflicting ethnic backgrounds. “I still feel like a people watcher on the outskirts of these cultures. I feel like I’m like a secret agent for both sides.”

She contemplated this dichotomy. “I don’t really know where I fit, but it’s not necessarily uncomfortable.” She went on, explaining, “I can live this dual life and I can find peace with that. I can relate to multiple groups and it gets me to take a step back and [ask myself] what do I really believe?” Stahl said she feels at home with herself, her own category. “I get to check in with myself which is a good thing because people are constantly changing.”

Stahl took the time to describe the conflicts between Christian and Jewish groups, noting that there is sometimes discrimination against each other as well as in-fighting within groups. She criticized becoming too used to one way of thinking for too long. “There’s an uncomfortableness that comes with being comfortable,” she remarked. “[Being a part of these conflicting groups] made me confront like the comfortableness that I have felt in the past.” She has been learning more about the communities she belongs to. “I don’t think it’s something that I will ever stop doing because there will always that familiarity [I need to confront].” She suggested that “maybe we should take a step back and become uncomfortable again. I think being uncomfortable, on the outskirts, lets you question toxic ideas in different groups no matter how well-intentioned they are.” Homophobia, transphobia, aphobia (discrimination against people on the asexual and aromantic spectrum), racism, and anti-Semitism are problems that she identified within her communities, including the queer community.

Stahl broke off to tell the story about her discovery of her Jewish heritage from her father’s side. “I knew my grandma and grandpa were Jewish, but it never really clicked for me that my family and I were also Jewish,” she said. Then, she described a film, Woman in Gold (2015), that helped her identify this part of group membership. She said that this connection to art is what brought connection to her heritage. She told the story of how her family fled Nazi occupied Poland to Russia and then to the United States. Once here, her great-grandfather sponsored many Jewish refugees during World War II many of whom came to visit her family in an old Massachusetts home. A relative still lives in New England that gives her a link to a larger family history. “This [discovery] has been informing some of my decisions lately,” she said. “It’s in the back of my mind, sometimes in the front and that’s okay. People are fluid.”

“I feel like a lot of groups say they represent something, but don’t have the actions to back it up. A good example is in the LGBTQ+ community when it claims to be all about inclusivity, but will exclude people of color from things,” Stahl commented. “You know, a Black trans woman [sparked] the gay rights movement,” she said referring to the Stonewall riots. “We should be including everyone because that’s what we’re preaching, right?” She discussed how her other groups, Christianity, Judaism, and the art community have histories with problematic views. She is hopeful about art, her area of specialty, “because it is all about breaking out of the mold.”

“An important thing to understand about any group is that people are fluid. We can’t define groups by broad terms and stereotypes,” she said. “I can’t speak for any groups [as a whole] because I make up one part and there are so many different stories that I don’t experience. I am a white person. I have a lot of privilege, so I can’t speak for anyone else’s experiences.”

“[People need to understand that] their own experience is not universal. There is so much in each person. We contradict each other. We should realize that human life is not easy. It’s not a black and white issue.” She continued, “[l]ive your full multitude and we should give people the space to experience that. We constantly change and develop. We’re going to make mistakes and we get to be better for it. We constantly get to improve, and that’s really exciting. It may seem overwhelming but it’s also a relief that you can make up for the bad thing you did yesterday by being good today.”