Subculture on Main: A. J. Ulwelling 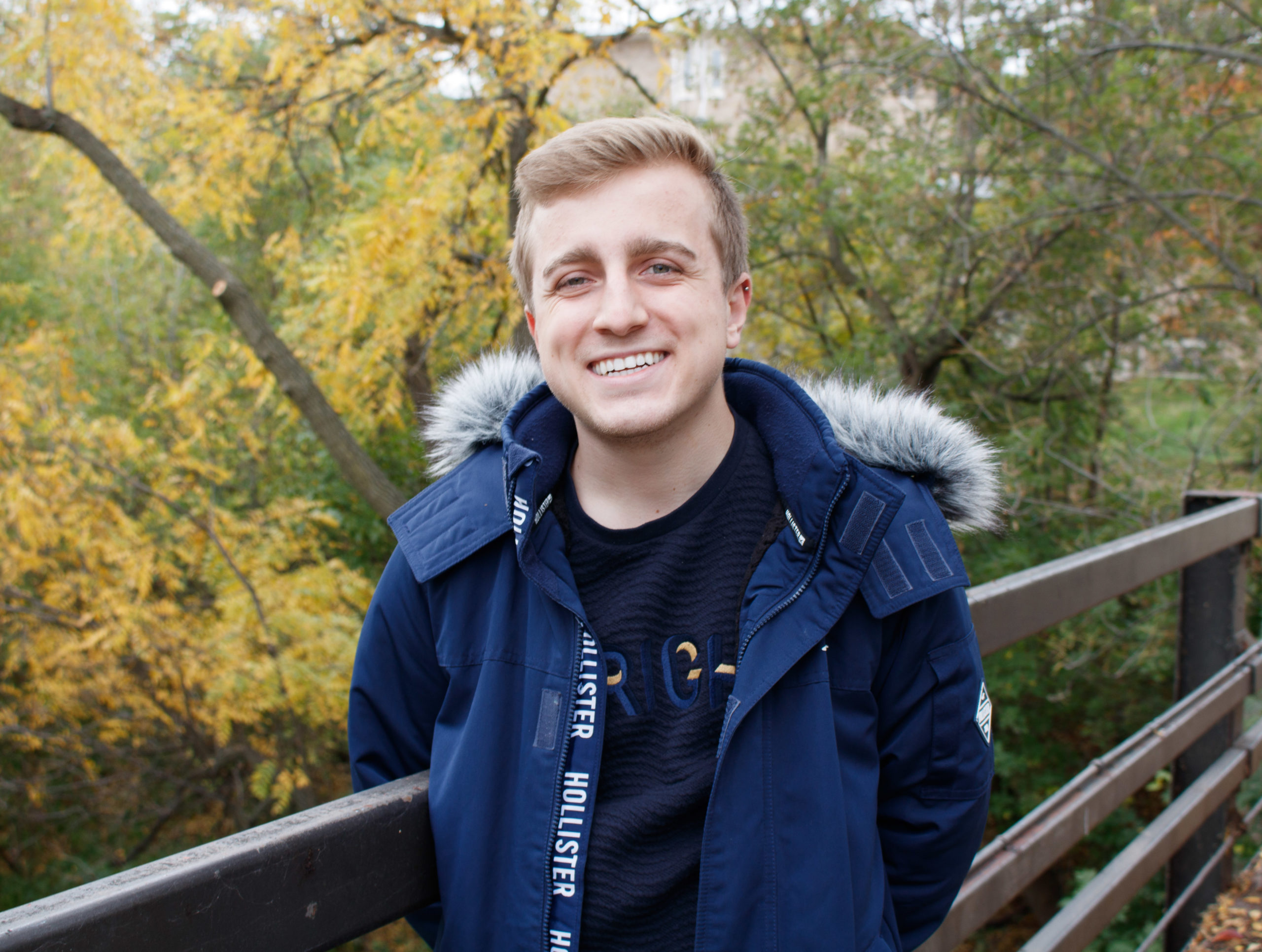 Subculture on Main strives to raise awareness of the diversity of people and important issues on the Lawrence University campus. Care is taken to give equal platform to unique individuals and to listen to their stories with an open mind. Interviews are reflective only of the interviewee on not of their whole group.

A. J. Ulwelling, a sophomore majoring in global and Russian studies, gave a glimpse into his world as a student athlete and in club leadership. He dives for the LU Swimming and Diving Team, organizes the Russian and Eastern European Club (LUREE) as president, and participate in the on-campus Jewish student union, Hillel. Ulwelling explained the importance of clubs in student life, “[t]hese communities on campus are both ways for people to be connected with those of like-minded individuals, but also so that they can welcome people from other backgrounds, to join and to learn more about different groups.”

During his senior year of high school after taking an introductory course in Russian, Ulwelling participated in a National Summer Linguistic Initiative for Youth (NSLIY) program in Moldova, a small eastern European country nestled between Ukraine and Romania. There, he lived with a host family and got to study at a university for eight weeks. “We had to speak Russian, mostly the whole time,” he said. “You go to class, and then go home where my [host] parents helped me with my homework. Sometimes my [host] sisters would, too. We also got to do other stuff like going to a street vendor. I ordered in very basic Russian, and they know you’re American, but they appreciate that you’re trying.” Ulwelling remembered ordering very tasty apple juice from a particular vendor, badly, in Russian. “You get to be part of the culture, live and be a part of it. I really enjoyed that, and I continued it at Lawrence.”

Now here, Ulwelling dives for the Swimming and Diving team which is a newly discovered passion of his. He described the team as a tight knit community. “You spend a lot of time with a certain group of people.” He continued, “[i]t gives you the chance to get close to them and even have a familial sense with each other. We go to practices every day, we do [weight] lifting and yoga together. For me, being a part of a sports team has been beneficial for helping me manage my time and having this group of people that are basically family that you can talk to.”

“Diving is something fun to do,” Ulwelling said. “I like competing. The team is a community even when you aren’t on the diving board. When you’re stretching or talking together, it’s a community. Even though you’re all competing against each other, you don’t really look at each other as competition because everyone is at such different levels that everybody scores so differently.” He commented that “[e]verybody will offer advice to you. I like the community here, especially because it [doesn’t feel] as cutthroat as a D1 school. It’s a wholesome [community].”

When Ulwelling is not at practice with his team, he brings the presence of Russia and Eastern Europe to campus. He coordinates events with other members of the LUREE team, Julia Hackler and Ryn Hintz, such as movie nights, alumni mixers, and discussions. You don’t have to speak Russian to join he said. Ulwelling approaches the alleged controversial involvement with Russian culture with care. “I think it would be fun to get more Russian involvement on campus because sometimes it seems like people only hear about political turmoil when it comes to Russia,” he explained. “Some people have a negative connotation toward it because of the politics. It’s important to show people more of the culture, that not all of Russia is its politics. I want them to see that it is a very welcoming group and teach people more about [what it means to be Russian] through the language, culture, history.”

Ulwelling talked about prejudice some Americans have against Russia. “I want them to understand that Russia is not just this terrible country, with a terrible leader, and conservative beliefs. These things are, to a certain extent, true, but it is more than that,” he said. “Given how Russian history developed, we have to understand that cultural differences exist. If we judge Russia for every cultural difference they have, then at the end of the day we’re just going to have a bunch of people who hate Russia.” Ulwelling wants to increase positive understandings of Russia in those who don’t know much about it. He invites all to consider learning more.

Ulwelling talked about his latest project that connected cities from across the United States and Russia in real time. “When I found out about this organization called Clean Games based in Russia, I wanted to bring it here,” he explained. “They organize these trash cleanups all around the world. The latest [event] was a partnership between the U.S. and Russia. The goal was to have 25 people at each site at each of the 10 sites [in the U.S. and 10 in Russia]. We had sites from California to Sochi (with one in Appleton, WI). It was an interesting experience to be part of a Russian NGO (non-government organization) and to be engaged in environmental concerns.” Clean Games is supported by the World Aral Region Charities that aim to educate communities about environmental pollution through play. The initiative began in 2014 and each game gathers 1 to 3 tons of garbage on average. Ulwelling organized the Appleton site at

“For me,” Ulwelling concluded, “being involved with clubs on campus feel very welcoming. For example, at Hillel you don’t have to be Jewish to come to events. Everybody is more than willing to teach about the religion. The same [goes for] swimming. Anybody who wants to swim can get in touch with Coach Drew and he can discuss training to get them involved.” He mentioned teamwork and family as things he has gained from LU Swimming and Diving. “And of course, at Russian club, anybody’s welcome. Pop that Zoom link in and come on over! The biggest part for me is that in Lawrence clubs everybody feels welcome. I’ve really enjoyed that here.”

You can get involved with LUREE by contacting A. J. Ulwelling at ulellia@lawrence.edu.