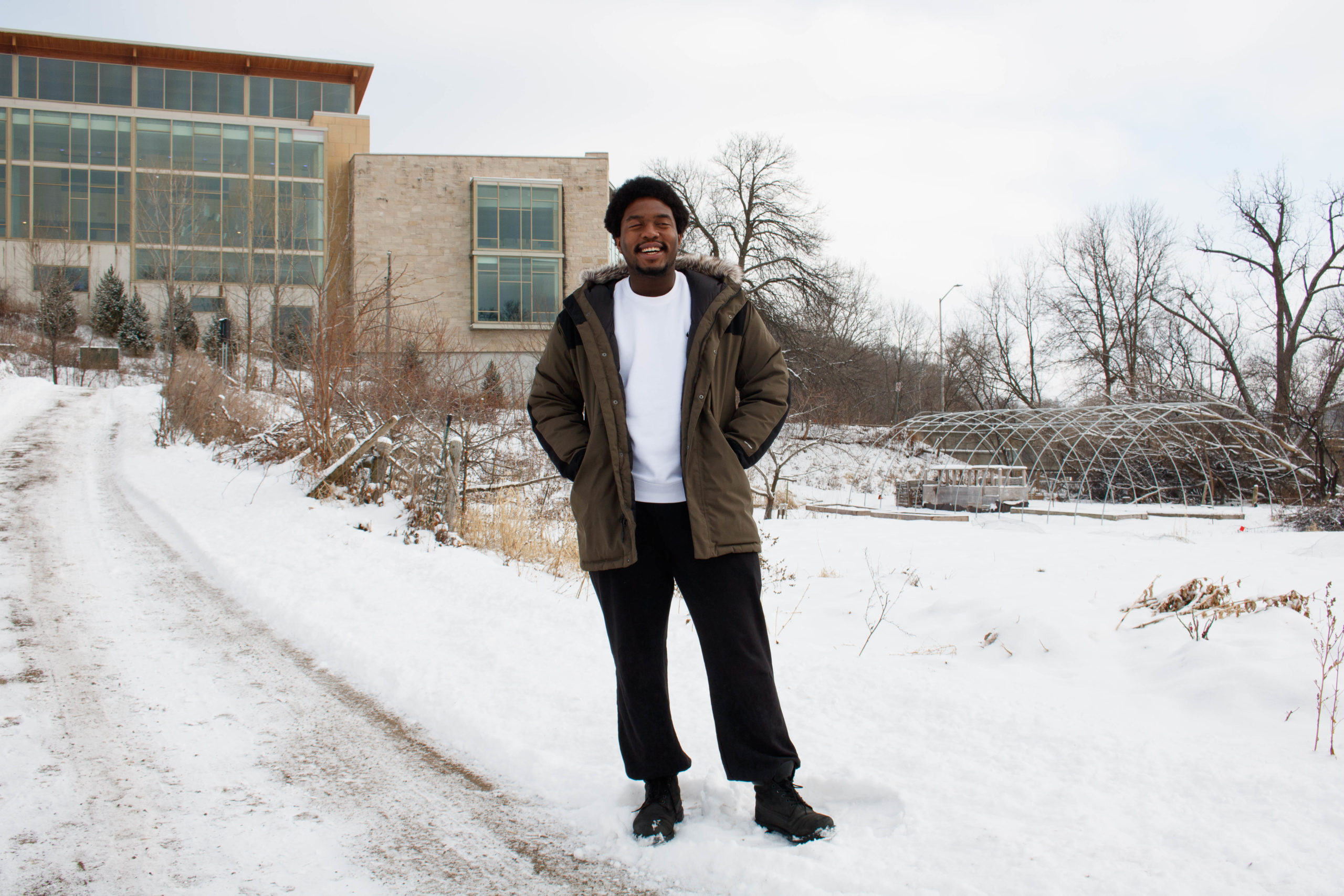 Oryan Brown, a senior math major graduating this spring, introduced his connection to the world of gardening and his belonging to the Sustainable Lawrence University Gardens (SLUG) on campus. SLUG is one of Lawrence’s many environmental efforts to maintain a green campus. The coalition runs the on-campus gardens located just west of Warch Campus Center on South Lawe Street. On the grounds, there are several plots of agriculturally useable land, a fieldhouse, a firepit and a beautiful connection to the Fox River. The student organization also sponsors a group-house living option and meal plan for those dedicated to the garden’s maintenance.

“I think I am at the point where I’m ready to move on beyond Lawrence […], but while I’m still here, I am trying to spend it with people I enjoy, doing things I enjoy and SLUG is a really big hub for those things,” Brown began. “If you had asked me [where I belong] freshman and sophomore or junior year, I would have had like 50 answers. I came into Lawrence being very deliberate about trying to experience as many different groups and activities as I could. Junior year I really started to think about all I’ve done and with who and where I think I feel the strongest sense of belonging on campus. That turned out to be SLUG. Since then, I [have] stripped away all those other things. This is what’s left,” he commented confidently.

Brown then described how he became involved with the SLUG organization. He tried out many different clubs which led him to the improv comedy club. “One of the members was a senior who’d been in SLUG. He talked it up real nice to me, and we went composting together.” He said, “For some reason, I enjoyed that, and, so, I came back and did more composting, went to the food garden and really enjoyed getting my hands dirty, working in the garden. SLUG members have a house, and we also have a meal plan,” he explained. “The meal plan gives us access to a full kitchen and money to buy ingredients and stuff. And, so, it’s a place where you can do a lot of cooking and eat really cool meals. […] I think food is a really good way for people to bond in general.”

“SLUG […] is the group that manages the [on-campus] garden,” Brown reported while describing what his organization does. “In the fall, we do a harvesting of the crops that we’ve grown over the summer. We put all the beds to sleep in the winter. All the stuff we harvest, we sell to Bon App or local people in the community, and, sometimes, we get a little stand set up at the [Appleton] farmer’s market. So, that’s a ton of fun,” he said. “[Currently], in the winter, there isn’t much going on because all the beds are asleep, and it’s very cold outside. We might do some composting from Bon App, but, in the spring, in my opinion, is when all the magic happens because all the seeds come in, and you start growing.” Brown continued, “All the plants start to [sprout] in the greenhouse. We have days where we transplant them to their little beds in the garden. You get to watch them grow and produce a ton of fruit for the following fall. [SLUG] manages that cycle. The garden attracts a ton of really cool people, and, so, I’ve had a lot of fun both with the garden and the community around the garden.”

Brown described what it is like to be a part of the community around the garden, “It’s a connection to the earth. Nature is all around us. I think that feeling of sticking your hands in the dirt is just so powerful. [What brings SLUG together] is that willingness to get dirty and mess around and see what we can create. [That feeling] really just connects you with that human desire, that human experience of just being close to the earth,” he reflected. “Having that meal plan and being about to get our hands on a ton of food from the farmer’s market and from [our] garden [made me feel] so good to know that we grew this. This Fall Term, we made this pasta dish that had all these tomatoes and herbs — the only thing that wasn’t from the garden was the pasta itself.”

Brown continued discussing belongingness to SLUG. “I think it would be great if there were slightly more visibility [for SLUG]. Continu[ing] to push that sustainability angle is important and also to have more people feel like they can have access to the garden space,” he said. “I would like to see more non-white people interacting with the garden because, as it stands right now, that’s not really a thing. I’ve tried to sing the virtues of the garden. It can just be seen as a white hippie kind of space sometimes. What’s more important to me is that other peoples across campus can actually be in the garden doing stuff.” Brown has ideas for improving diversity in the gardening community that may be in the works soon.

“Whenever I think about my future,” Brown said, “there’s always a little garden somewhere. One of the things I’ve told myself to commit to is trying to get involved with a local urban garden somewhere or something like that. Doing this work has meant a lot to me, and I want to keep doing it.

Brown is looking forward to life after Lawrence. He plans to teach high school math in Minneapolis where he has many friends and Lawrence connections. One of his goals is to help run an urban garden there. He said that the gardening and life skills he learned as a member of SLUG will stay with him forever, and he hopes to use them in the future.