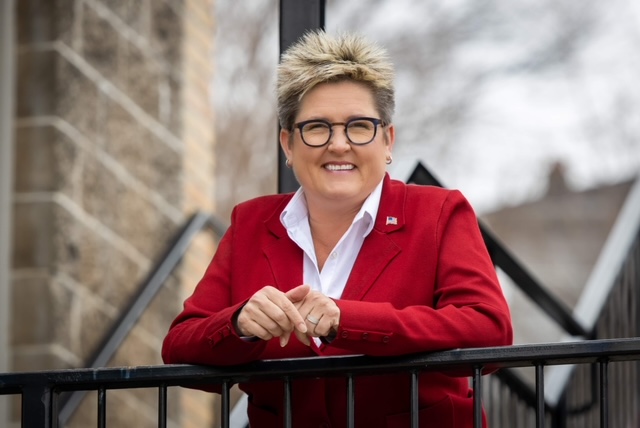 Alfheim has not been in politics for very long, having just been elected to the common council in April 2021. Before running for office, she worked in politics as a volunteer and advocate, and recalled feeling frustrated upon finding that, even when advocating for common sense issues like Alzheimer’s research, the people she was volunteering with expected the other side to automatically oppose it.

When she came into office on the council, she was the swing vote between the progressive and conservative sides of the council, and often worked with both sides to move things forward, to the point where Mayor Jake Woodford referred to her as “the moderator.”

In 2018, now-Assemblywoman Lee Snodgrass (D-WI) ran against Senator Roger Roth (R-WI) and lost by only 7 percentage points. Now, Roth is running for Lieutenant Governor and his State Senate seat is open. Alfheim credited Snodgrass for her efforts and her work in the Assembly, calling her “great,” and discussed the importance of crediting those who came before her. She feels that she has a better chance this election cycle than Snodgrass did in 2018, thanks to a combination of the district being 1.5% more Democratic after redistricting, the incumbent not running for reelection and her position as a moderate candidate. She added that her seat is the only one standing in the way of Republicans having a supermajority (veto-proof majority) in the State Senate.

To Alfheim, being moderate does not mean giving up your values. However, she feels that the major roles of a public official are to represent the people that elected you and to build relationships with the other members of the body in order to get things passed. She says she believes in science, LGBTQ rights and women’s rights, among other values, and she feels she can work across the aisle without compromising those values. She considers herself a problem solver.

Among the policies Alfheim supports is getting Wisconsin to carbon neutrality by 2050. Although she says she is open to plans that will get us to that point earlier, she doesn’t see it passing until Wisconsin’s structural issues are addressed, such as basic public services being defunded by the state government. She believes it’s important for us to be proper stewards of our planet.

Workers’ rights is another economic issue that Alfheim discussed. She believes it’s important for workers and businesses to have a symbiotic relationship. The GOP has convinced many Wisconsinites that the solution to economic problems is to crush unions and slash wages, Alfheim stated. She pointed out that corporate-friendly policies create a cycle where businesses are able to create a lot of jobs, but they don’t want to share the wealth generated and all of the power is concentrated in the hands of the corporations. Then, she added, when working conditions are bad, no one wants to work, and corporations are forced to make concessions to workers in order to recruit them, putting the power back in the hands of the workers. She doesn’t feel that this is a sustainable way to handle an economy.

“We cannot make all decisions in favor of corporate America,” said Alfheim. “We have to work together.”

Cannabis legalization is another issue Alfheim supports. She pointed out that even though cannabis is illegal, people frequently travel to Michigan and Illinois from Wisconsin to obtain it, and we have dispensaries selling “Delta-8” and “Delta-10” (types of cannabis that contain THC but can be sold in Wisconsin and other prohibition states due to legal work-arounds). Both of these mean that cannabis is still used in the state, regardless of its prohibition status. She also pointed out that prohibition forces the legal system to spend time and resources enforcing drug possession laws instead of solving serious crimes.

Alfheim also discussed the privilege aspect of drug criminalization. She mentioned that if her child were caught up in a situation like this, she would be able to call an attorney, pay the money and have the situation be over within a day. Not every family has that privilege, she stressed. She feels that public defenders being underpaid leads to subpar services for the socioeconomically disadvantaged, who are more likely to turn to public defenders when dealing with drug charges. Alfheim pointed out that while on trial, someone charged with drug possession can’t work or support their family. Alfheim concluded that by criminalizing drug use, underfunding affordable legal services and not providing ways for those in jail to support their families, prohibition is ruining lives, especially in already-disadvantaged communities. She added that people often take for granted the opportunities that having disposable income provides, both in your ability to defend yourself legally and your ability to avoid the situations that would lead you to commit a crime.

“It’s just common sense that people [shouldn’t be] treated as villains when it’s something as petty as possession of a small amount [of cannabis],” Alfheim said.

Alfheim is also passionate about abortion rights and equality. She pointed out the absurdity that Wisconsin is being subjected to an abortion ban from 1849, when women didn’t even have the right to vote (although Attorney General Josh Kaul (D-WI) has argued that a 1985 law permitting abortion up to the point of viability supersedes the 1849 law). She feels that abortion is a deeply personal issue, and that nobody has the right to get in between those decisions. She added that you can be anti-abortion personally, but you should respect each person’s right to make their own decisions about their body. She also discussed her passion for LGBTQ rights, and as someone who didn’t come out as lesbian until she was in her forties, she sees the importance of letting people live as their true selves when they figure out who they are. Alfheim added that Republicans don’t really care about the issue but use it to flare up their base.

“I will be in the LGBT caucus strongly and proudly fighting for the rights of people like me and others to just be healthy,” said Alfheim. “Who’s that hurting?”

Alfheim grew up on a small farm in Wisconsin. Her father was a union worker at the paper mill and her mother was a pro-life Catholic. Before she knew she was gay, she got married young and had two kids with someone she described as a “good man.” She recalls that about 15 or 20 years into their 25-year marriage, Alfheim began to question the situation she was in, and she described knowing she was gay as being like hearing music for the first time. She decided to leave her marriage, which forced her to come out, because, as she recalls, no one would have understood why if she didn’t.

“I am who I am today because I let myself be who I needed to be, which allowed me to be a healthier person,” said Alfheim.

To queer kids growing up in family situations that are not friendly, or queer adults living in less-than-accepting communities, Alfheim had some advice. She spoke from experience about how being rejected for who you are is painful, but she sees the importance in surrounding yourself with people who accept you, so that the acceptance drowns out the rejection.

Alfheim is now an out and proud lesbian woman, and will be marrying her wife on Friday, October 14, the same day this article will be published.