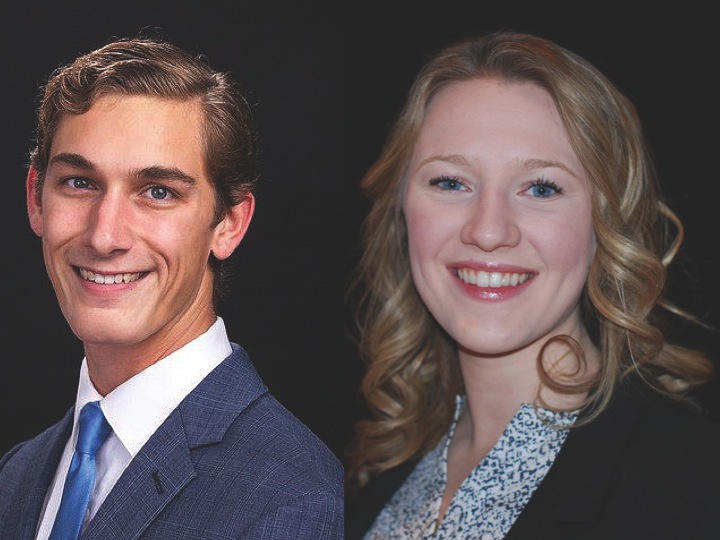 The Lawrence University Community Council (LUCC) conducted its annual executive elections on Tuesday, Jan. 19. Hours after the election concluded, The Lawrentian broke the news that juniors Max Loebl and Jo-Hanna Rifai had been elected president and vice president of LUCC respectively.

Preparations for the election started in ninth week of Fall Term when LUCC released the applications, each requiring 150 signatures from the student population before the candidate was eligible to run. These applications were due on Saturday, Jan. 9, but only one application for president and two for vice president were received by this due date.

Upon the recommendation of senior and LUCC President Wesley Varughese, LUCC General Council voted to extend the deadline for submission of materials to Thursday, Jan. 14. Upon the completion of this extended deadline, two additional candidates had submitted the paperwork.

The final candidate pool was composed of Loebl and junior Abedin Rafique running for president, and juniors Elana Lambert, Glenn McMahon and Rifai contesting in the vice presidential race. Lambert later withdrew from the election.

“During my time at Lawrence, I’ve spent a lot of time trying to help other people. It’s something I thrive on,” said Loebl. “I decided to run for LUCC president because I feel like that’s an excellent position to empower the student body.”

Rafique ran with greater internal experience within LUCC, having spent the past year serving on the LUCC cabinet as public relations secretary. “My platform was focused on going beyond the administrative role that LUCC has traditionally played, and working for the marginalized community within the limitations of this position,” said Rafique.

To adequately prepare the community to vote, LUCC and The Lawrentian pursued various methods of disseminating information about the candidates. The newspaper published each candidates’ platforms on its website to complement the brief statement available just prior to balloting.

In addition, Varughese and LUCC Vice President Ali Heiring hosted the second edition of a quasi-formal radio debate with the candidates. The debate was conducted over the student-run internet radio station WLFM on Sunday, Jan. 17.

The following evening, The Lawrentian Editor-in-Chief Zach Ben-Amots and Copy Chief Amaan Khan hosted the more formal debate with the candidates. This year’s debate differed from others in both its location and tone. Hosted in the Nathan Marsh Pusey room of the Warch Campus Center rather than the café as in past years, the debate’s focus remained on nearly all campus issues with the community council’s purview.

“[In previous debates,] people were trying to ask intelligent questions, but no one knew what LUCC was doing and LUCC wasn’t really dealing with substantive issues,” said Paulson. Instead, this year’s debate included incorporated questions of interest such as “how can you use the student government and the student funds and student housing to support inclusivity.” Paulson served as LUCC president during his time as a student and has attended the last six executive election debates.

Varughese also noted the changes in debate quality and format. “At least 30 to 40 people attended, even on a day with major events scheduled on campus,” concluded Varughese. “These students were actively listening and asking questions, showing us that there were so many different pieces to hit during this election.”

Balloting took place on Tuesday, Jan. 19 from 10 a.m. to 8 p.m. in the Warch Campus Center without any major issues. Separate voting booths were also set up in the Alexander Gymnasium and the Conservatory from 4 p.m. to 7 p.m. For the executive elections, this was the first attempt at one-day voting and the second at the establishment of multiple voting booths across campus.

By the day’s end, 652 and 644 ballots were submitted for presidential and vice presidential elections respectively. This marked significantly higher student involvement than that of previous years.

LUCC Parliamentarian Adam McDonald felt this year’s election ran smoothly and effectively engaged the student body. “Having polls open all day and three locations helped to give students more opportunities to cast their vote,” said McDonald. “Compacting the election into one day also helped to create more excitement around the election, which hopefully increased voter turnout.”

Around midnight, the ballots had been counted and results were officially sent to the candidates. According to protocol, the results are to be kept private for three days beyond the release since candidates have the right to contest the outcome for that duration.

However, this year, all four candidates waived their right to contest the results through written communication with Varughese. The Lawrentian broke the news through social media in the early hours of Wednesday, Jan. 20 as the campus buzzed with excitement.

“Although LUCC can [only] engage with a limited number of people, the voting process is still open to the entire campus,” said Rafique. “It was clearly important for all candidates to engage with students outside of their target groups and address the needs of the general student body.”

Both election winners are excited to take office and are already looking forward to enacting policy and reform in the student government.

“Going through the elections was a great experience,” said Rifai. “I want to congratulate all the candidates on great runs, and I look forward to a productive year ahead.”

Regarding potential LUCC changes in the coming year, Loebl said, “I definitely want to work on restructuring Judicial Board and maybe looking at an alternative system of reporting for instances of racial bias […] And I would also like to explore a mandatory expulsion policy [within the sexual misconduct policy].”

Both will be transitioning through the rest of this term and will take office Spring Term. 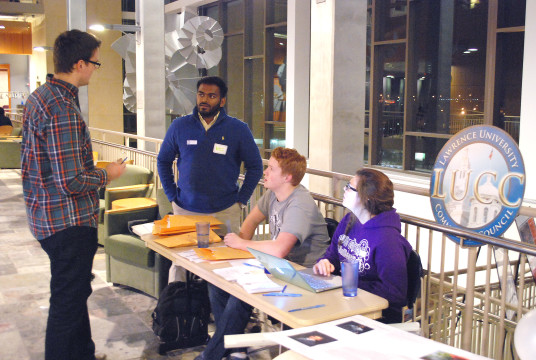 Photo by Michael Hubbard LUCC representatives and officers table at the voting booth on Tuesday, Jan 19.

[UPDATE: This article incorrectly listed the 2016 executive elections as the second ones conducted over a single day. These were, in fact, the first one-day executive elections. The article has been amended to reflect the correction.]

The Lawrence University Community Council (LUCC) conducted its annual executive elections on Tuesday, Jan. 19. Hours after the election concluded, The Lawrentian broke the news that juniors Max Loebl and Jo-Hanna Rifai had been elected president and vice president of LUCC respectively. Preparations for the election started in ninth week of Fall Term when LUCC…