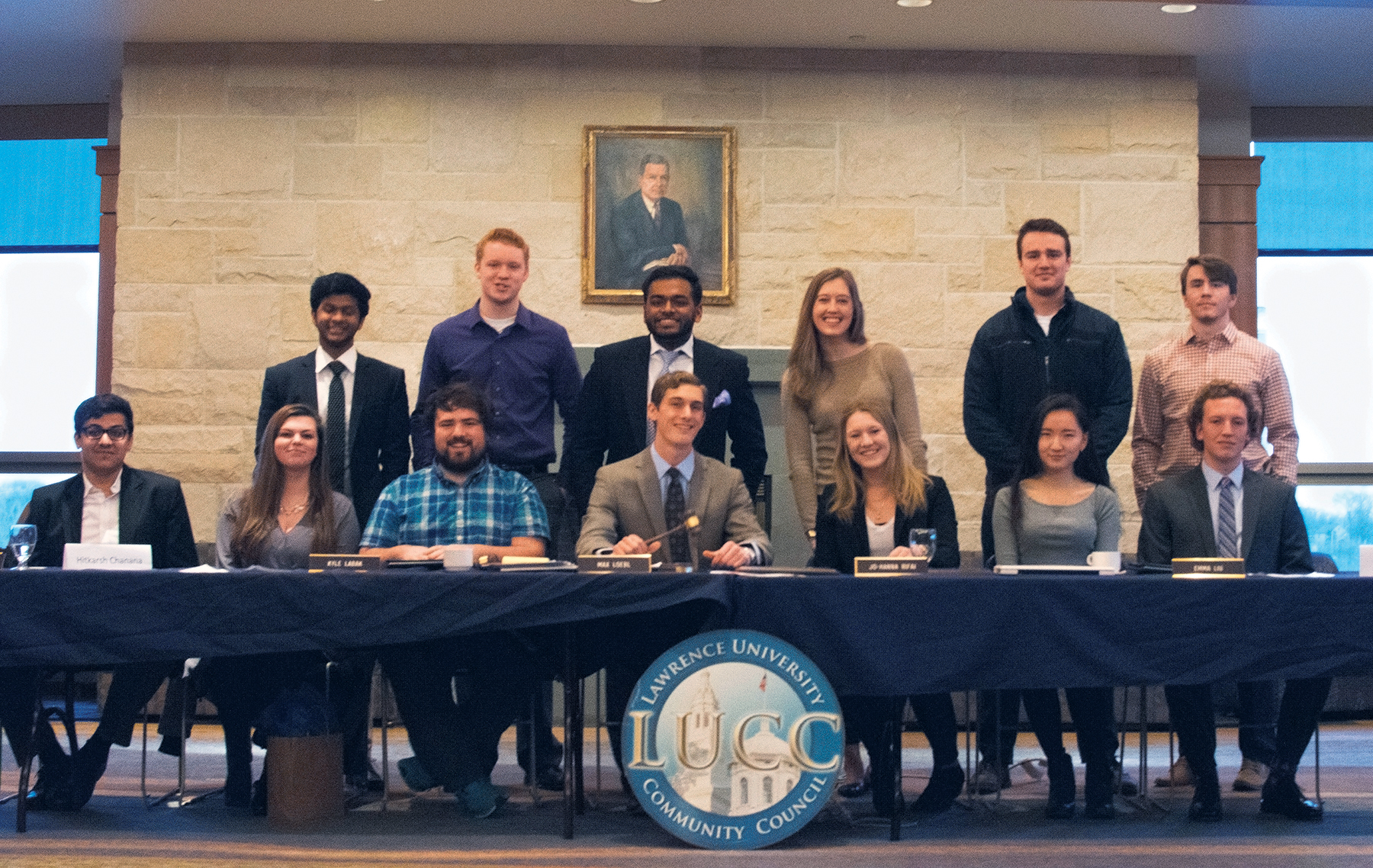 Former LUCC officers (back row) ushered in the new cabinet at General Council.

Lawrence University Community Council (LUCC) held its final General Council meeting of the term on Monday, Feb. 29. This meeting was especially significant as the student government passed two pieces of legislation and transitioned its cabinet.

The first legislation was the revised group living policy that has been on the drawing board for over a year. Last Winter Term, on Feb. 9, 2015, the LUCC Residence Life Committee brought a proposed revision to General Council and the same week held a campus forum to introduce the legislation to the broader community.

The proposal became a divisive issue for both the community and LUCC, resulting in its retraction. In particular, the length of the housing compact—reduced to one year for all houses under the proposal—was the source of much contention.

“Lots of people didn’t understand why we were changing things, so they wanted to keep housing policy as it was,” said senior and former Residence Life Committee Chair Jennifer Sefcik. “After group housing [procedures] last year, I think [students began to] realize the problems.”

LUCC Sophomore Class Representative Harrison Barber, who was on the council last year as well, noted the lack of student involvement in crafting the original legislation. “Part of the reason LUCC and some of the students were so opposed to the previous legislation was that it seemed to come more from staff than from students,” said Barber.

Amid controversy that staff members had undue influence on LUCC activity, the community council passed a constitutional amendment that barred any non-students from writing legislation.

This year, Residence Life took up the complicated responsibility once again. However, junior and Chair Malcolm Lunn-Craft and sophomore and Vice Chair Daniel Thomas-Commins were intent on learning from the lessons of the previous year. “We really reimagined a lot of the ways that we’ve done things in the past,” said Thomas-Commins. “We were working from the ground-up [to figure out] what do we all want to see in group housing.”

The first step was outreach. Lunn-Craft tracked down current residence life managers (RLMs) and student contacts of group houses to gather input on the housing policies. After these meetings and conversations with individual groups, Thomas-Commins began drafting the lengthy document by taking the existing legislation and revising it extensively.

The following months were filled with constant revisions and updates. Residence Life considered input from students and staff, and incorporated the changes into the document. “By the time we were done with it, the version that passed LUCC I believe was the 17th version of the legislation that was written,” said Thomas-Commins.

By Winter Term, a draft was ready to be discussed with LUCC’s Steering Committee. Commins spent multiple meetings discussing the legislation with student representatives, debating over any concerns brought forward, taking the suggestions back to Residence Life and reporting back to Steering.

These discussions reached their peak at a campus-wide forum on Wednesday, Feb. 3, in the Warch Campus Center Cinema. This provided the final stage for feedback from the larger student body.

On Monday, Feb. 8, the legislation was introduced to General Council through a motion by Lunn-Craft. During the lengthy discussion on the issue, Vice President for Student Affairs Nancy Truesdell brought up concerns regarding the inclusion of certain staff members in the selection board. In particular, she suggested that the new associate dean of the faculty and vice president for diversity and inclusion may not be an appropriate addition to the board.

Dean of Students Curt Lauderdale questioned whether Residence Life and General Council would be the appropriate forums to penalize groups with egregious violations. Instead, he suggested that his office and the Judicial Board remain the bodies vested with this charge. The drafters of the document accepted both Truesdell and Lauderdale’s suggestions by incorporating them into a later amendment.

Student representatives also brought up various concerns. In particular, the nomination, appointment and vetting of the selection board led to a heated discussion about whether Steering Committee should be more effectively involved in the process. The meeting ended without much consensus and the legislation was tabled with emotions running high.

“It became evident that nobody was on the same page,” reflected Junior Class Representative Suzanne Hones. Freshman Madison Gardner, who was a class representative at that time, added, “For a moment, we were a little scared that it wouldn’t be passed and that we wouldn’t have it for this coming Spring Term.”

Read further: Up on the Bluff: Saving Small Housing

The following day, Lunn-Craft and Thomas-Commins met with Steering Committee once more to reflect on the events of the previous night. Eventually, the two committees compromised to both take part in vetting the nominations and applications. “We needed to make sure there was no bias that existed within a housing selection committee,” said senior and LUCC President Emeritus Wesley Varughese.

In order to ensure successful passage of the legislation during the final General Council of the term, then-LUCC President Varughese invoked his constitutional right to call a special meeting on Monday, Feb. 15—the first this year. At this emergency meeting, Lunn-Craft and Thomas-Commins went over the compromise with Steering and other amendments made by Residence Life. In addition, student representatives brought up any remaining concerns with the legislation.

“I know that there was some tension along the way. I think we’ve addressed that at this point,” said Thomas-Commins. “We all understand that we’re all coming at this from a position of goodwill, we all have good intentions. I think what really came out during this whole ordeal was the best of the legislative process.”

On Thursday, Feb. 18, Residence Life finalized a comprehensive amendment to the group living legislation. This was presented to General Council at its next meeting and passed without any hindrance. Following protocol, the legislation in its final form was tabled to be approved at the last General Council of the term.

The final draft of the group living policy reflected various changes from the existing setup. Some of the salient features include the conglomeration of all group housing under one umbrella, replacement of the three-year compacts with two-year ones, enhanced community service and safe space training requirements, and a randomly drawn selection board.

On the Monday, Feb. 29 meeting of the General Council, Lunn-Craft motioned to approve the group living legislation and, amid much applause, the motion passed unanimously. Following the passage, everyone involved felt relieved and satisfied with the final product.

“I feel as though the weight of the LUCC world is off our shoulders, finally,” said Lunn-Craft. “I am really excited that we have a new process ready to get up and running for next term and next year. With a more streamlined process, I think everyone will be a lot happier.”

“All group living has now moved into the hands of students for selection, legislation and application,” reflected Varughese. “That has been the final selling point for everyone involved.” Gardner was hopeful that, in the future, more students would take advantage of various opportunities to review proposed legislation while it was still in the works. Hones commented she is “as excited as one can be about housing legislation.”

Thomas-Commins, however, was “not quite exhaling yet” since his committee still needs to implement the legislation. In addition to working with Steering Committee to draft a set of guidelines for the creation of the selection board, Residence Life needs to disseminate information and conduct the review and application procedures.

This last meeting of the General Council also marked the transition of LUCC’s cabinet. To commemorate the occasion, the meeting was held in the Nathan Marsh Pusey room—instead of the Esch Hurvis room— of the Warch Campus Center and was followed by a reception for the attendees.

During the meeting, upon the recommendation of junior and then-LUCC Parliamentarian Adam McDonald, the council voted to appoint Varughese to the honorary position of president emeritus and senior Ali Heiring to vice president emeritus in gratitude for their work. Both then handed over charge to their successors—juniors Max Loebl and Jo-Hanna Rifai—who, in turn, introduced their cabinet.

Reflecting on the past cabinet, various LUCC members praised their dedication and the amount of work they got done. Lunn-Craft and Thomas-Commins, for instance, were appreciative of the responsiveness of the outgoing leadership in the process of getting the group living legislation passed. Labak admired Varughese for “balancing that which is personal and colloquial and that which is business.”

Looking ahead, both Labak and Gardner—who will serve as parliamentarian and general secretary, respectively, on the new cabinet—are enthusiastic for their year of service. “I’m just excited to learn more, do more,” concluded Gardner.

NOTE: An abridged version of this article was published in the print issue on Friday, March 4, 2016.